‘Imagine a World Without Hate ®’ – ADL Assembly to Return

The Anti-Defamation League (ADL) was originally founded in 1913 to combat anti-semitism and the defamation of Jewish people. Today, ADL works to prevent all forms of bigotry. 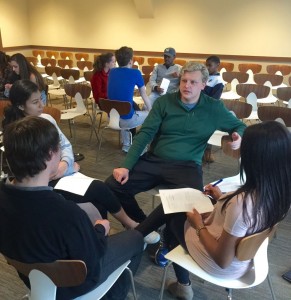 Two years ago, Pace Diversity Director Rick Holifield brought the Anti-Defamation League to Atlanta to put on their “Names Can Really Hurt Us” assembly program. He had worked in the past with ADL at St. Luke’s, his previous school in New Canaan, Connecticut. At first, Mr. Holifield received a lot of negativity when he raised the idea of bringing ADL to Pace Academy’s Upper School. Both students and faculty did not believe the students would actually participate in the assembly, being that it was a half-day discussion-centered, open mic format. However, Mr. Holifield had witnessed the positive outcome of ADL working with his old school, and he stuck to his gut feeling in keeping with the assembly and the format.

Mr. Dana Smith came to Pace Academy to teach students about the ADL Names assembly that would be held in the FAC two years ago. He discovered ADL in New York, where he began training to become a “credentialed, local and national trainer.” He was also the moderator for the Pace assembly, representing ADL. Mr. Smith has been working with ADL for fifteen years now.

Much to the community’s surprise, the Names Can Really Hurt Us assembly was one of the most memorable and perhaps most talked about assemblies Pace has had in several years. Four student panelists and Mr. Smith spoke in front of the Upper School for about an hour before opening up the mic to the students. Once the chance came, students flooded the stage to share their stories in front of the Pace community. Mr. Holifield ended up having to cut students off who wanted to share, because the assembly actually ran over time.

Mr. Holifield had planned on bringing ADL back every three years. However, members of the Class of 2016 bombarded Mr. Holifield’s office asking to have another assembly before they graduate. So on March 2, Pace’s Upper School students and faculty will attend the half-day ADL Names Can Really Hurt Us Assembly from 8:30-11:30 a.m., preceding lunch and afternoon classes.

“The Names Can Really Hurt Us assembly program’s goals are to create a safe forum for students to discuss name calling, bullying and harassment in their schools through student-centered assembly programs,” said Ms. Erin Beacham, Education Project Director at ADL. “Our hope is that the Names assembly can be a great starting point for continuing to build safe and inclusive classrooms, hallways, locker rooms, etc. at Pace Academy. This program can really be the beginning of some great dialogue on campus and the building of a stronger community.”