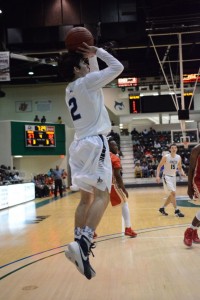 Junior Barrett Baker lines up a jump shot in the third quarter of the Elite Eight matchup against Thomasville. Baker, a junior, finished with 17 points on the night. Photo: Fred Assaf

With last year’s GHSA Elite Eight upset at the hands of Vidalia still fresh in the minds of the Pace Academy Knights, Pace pulled an upset of their own Friday night, demolishing a #1-ranked Thomasville team at Georgia College & State University in Milledgeville, Georgia.

Despite coming in as the underdog to the tall and lanky Bulldog team with an impressive 28-1 record on the year, Pace imposed their will from the start, racing out to a 19-10 first quarter lead behind a pair of 3s from senior Zack Kaminsky and 9 early points from junior Wendell Carter, Jr., who was the star of the night. Undeterred by the inside presence from Thomasville, including 6’8″ freshman Titus Wright and 6’8″ sophomore Reggie Perry, Carter scored at will throughout the game, whether it was from post moves, thunderous dunks in transition or the occasional 3-pointer.

Although Pace pushed the lead to 16 to start the second quarter, Thomasville charged back and cut it to as close as 7 before going into halftime trailing 33-24. Despite the 9-point advantage, there was a sense of unease among Pace fans that Thomasville could make a run to get back into the game.

Enter Barrett Baker. The junior guard exploded at the start of the second half, nailing three 3-pointers and a layup to keep extending the lead while sending the traveling Pace supporters into a frenzy. Thomasville looked defeated, as Pace didn’t let up, stretching the lead even further behind the junior tandem of Carter and Baker. At the end of the third, Pace led 55-32 and the game was all but over. As the final buzzer sounded, the Pace students and players celebrated a 75-48 win and a berth in their first Final Four since 1985.

Carter led all scorers on the night, finishing with a triple-double and a stat line of 26 points, 14 rebounds, 12 blocks and 4 assists. Baker scored 17 points, while Kaminsky added 13.

Pace will take on #2-ranked Crawford County in the Final Four of the GHSA state championship playoffs tonight in Milledgeville. Crawford County opened the state playoffs by dominating defending state champions Seminole County 95-64, before winning a close game against Temple and beating Pace’s region rival Holy Innocents’ by 10 points in the Elite Eight. Pace will have to shut down Crawford County’s William Jarrell, a small forward who is averaging 25 points and 11 rebounds a game on the year. Tip off is at 8:15 p.m., and you can follow a live tweeting stream on the KnightFlix twitter account, @KnightFlix.

Thanks to Kyle Sandy and sandysspiel.com for help with statistics.