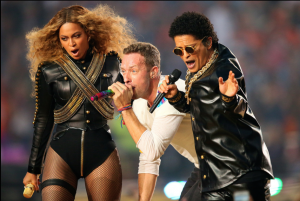 One of the most highly anticipated moments in any Super Bowl is the halftime show, yet this year there were many who were unenthused over the choice of Coldplay as the main act for Super Bowl 50. This 20-year-old British rock band led by lead vocalist Chris Martin is world-renowned and has a lot of experience in front of large audiences, but a crowd of 100 million is hard to please.

Coldplay started off with their slow song “Viva La Vida,” surrounded by brightly dressed children violinists from the Los Angeles Youth Orchestra on stage. The band members themselves were wearing rather muted colors, which slightly diminished their presentation. They then went into their more recent songs “Paradise” and “Adventures of a Lifetime,” jumping with the violinists as dancers on the field spun paper maché flowers. The colorful elements were creative and different, which is always enjoyable to see from an older band.

In an uproar, Bruno Mars, backed by his male posse and DJ Mark Ronson, took the stage with their popular song “Uptown Funk.” The contagious energy Bruno brought with his entrance really helped the momentum of the entire halftime performance. Dressed in a sleek black outfit and sunglasses, Bruno Mars showed off his skilled dance moves and spunky personality, making him well worth bringing back to the Super Bowl Halftime Show stage.

Making an entrance from the field with her pack of single ladies, Beyoncé sang and danced to her newly released song “Formation.” Beyoncé incorporated cool formations on the field such as an arrow with her at the tip, pointing to the main star of the show. Beyonce’s entrance was one of the highlights of the show, and even if she almost took a tumble when droppin’ low, she managed to shake it off elegantly like the Queen B she is. Beyoncé took heat from some conservative media pundits and politicians with her performance, which seemed to attack police officers and reference the Black Panther movement and Malcolm X. She definitely made a statement, whether or not it was intentionally controversial.

Some of the most talked about moments of the show include the dance-off between Beyoncé and Bruno Mars with a medley of “Crazy in Love” and also the final montage of past Super Bowl halftime performers. Some included Bruce Springsteen, James Brown, Michael Jackson, the Rolling Stones, U2 and Whitney Houston. The love displayed during this special moment was captured perfectly as Chris Martin, Beyoncé and Bruno Mars sang the final song “Up&Up” together and fans in the stands held up signs that spelled out “Believe in Love.” This colorful moment appeared to resonate with most everyone watching, and should be commended for the amount of effort and creativity put into conveying a beautiful message.

Yet maybe next year the halftime show could feature an artist or group that can bring the same energy like Beyoncé and Bruno Mars did to the stage, for if it was just Coldplay performing, the show might have been a little dull for viewers.