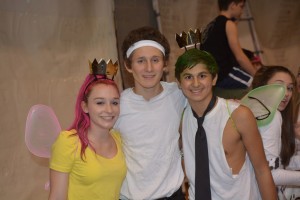 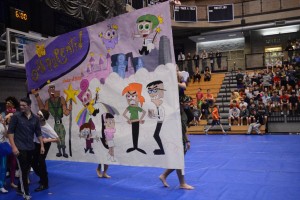 Every year, upperclassmen are eager to see how the freshmen execute their first Spirit Week. This year, the Class of 2019 chose a rather unique theme, the Nickelodeon TV show, “The Fairly OddParents.” They decorated the trees between Inman and the Upper School with paper fairy cutouts. The freshmen had the most difficult decorations due to weather challenges, but the class tried their best.

With only $500 to spend, the lowest budget out of the four classes, the freshmen are not expected to have the most elaborate costumes; however, “The Fairly OddParents” was an easy theme to make inexpensive costumes for. Freshmen Andrew Ladden and Kylie Blank were fairies Cosmo and Wanda with colorful wings, crowns, and pink and green hair dye. Freshman Patrick Thurman was Timmy Turner, dressed in a simple T-shirt and shorts. At first, other students wondered how the class would be able to make enough character groups. However, the freshmen created a group of good fairies, evil fairies, Timmy Turners and Icky Vickies.

Between every song, a recognizable jingle from the show itself played as transition time. The choreography was cohesive enough for a freshman Spirit Week dance, as the freshmen are not expected to have the best choreography. The Class of 2019 started earlier than most freshman classes do, the weekend before, and they were able to pull off a cute fairy performance. 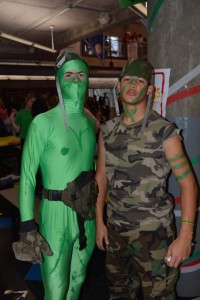 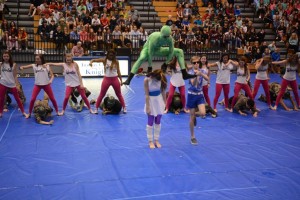 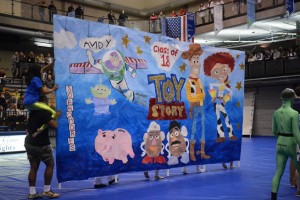 Even though the “Toy Story” theme was done in 2009 by the Class of 2012, the Class of 2018 did a swell job during this Spirit Week. The class decorated the cafeteria as a “Toy Story” wonderland, with oversized letter blocks, a hanging toy army (or “amry”) men and amateur doodles of Woody and Buzz. The sophomores’ Friday performance was noticeably better than last year’s “101 Dalmatians.” With the increase in Spirit Week budget from $500 to $1000, an improvement in decorations and costumes likely influenced the overall morale of the grade.

Using a track from the original Pixar movie, sophomores dressed as the main toys Woody, Jessie, Slinky, TRex, Piggy Bank, Barbie, Ken, Claw Alien, Mr. and Mrs. Potato Head and Toy Soldier all “woke up” and started dancing. Buzz Lightyear, played by sophomore Will Nulty, then ran on and was carried off by Woody, played by sophomore Charlie Stonecipher. The cowgirls had the cleanest formation changes possibly out of the whole Upper School.

Overall, the sophomore costumes were creative and endearing, especially the full body pig and dinosaur onesies. The toy soldier dance to “Pony” from the “Magic Mike” soundtrack was interesting but slightly uncomfortable for the adult judges to have right in front of their eyes. Schuyler Drose’s character Ken being fought over by the multiple Barbie dolls was hilarious. The best stunt of the sophomore performance was definitely Gunnor Faulk (toy soldier) jumping over Khaki Loughran’s (Barbie) head. All of the leads certainly had a lot of spirit in this year’s performance. In the end, all of the toys came together, clapping and jumping around to B.o.B’s pop song “Magic” for a cuddly finale.