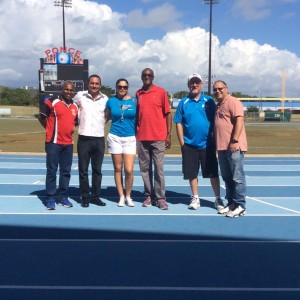 Puerto Rican legend and Pace Spanish teacher Laura Agront-Hobbs returned home a few weeks ago to help plan an AAU track meet for June 2016. Sra. Agront-Hobbs holds the Puerto Rican record in high jump at 6’1″ and has competed in the Pan-American games, the Central American games, and the Olympics. She also carries the title of Puerto Rico’s Athlete of the Year for 1984 and 1985.

Sra. Agront-Hobbs was asked to help organize the meet in Puerto Rico to showcase 1200 track athletes ranging in age from 5 to 18. With the help of the president of AAU Track and Field, Charles Oliver, and a committee in Puerto Rico, Sra. Agront-Hobbs is working as an ambassador and a translator to work out the details of the meet. “We’re here and they’re over there and there’s a lot in between us, so it’s good to do it person-to-person so we can say ‘this is what we need from you guys and this is what we can offer’ and just take it from there,” said Sra. Agront-Hobbs.

Last summer, Sra. Agront-Hobbs got to know some of the kids while she was at the AAU championship and the Junior Olympics in Virginia. “For me it’s more about being involved and watching the kids, the young ones, all the way to the high school kids and to see the things they’re doing and hear about their dreams,” she said.

According to Sra. Agront-Hobbs, the meeting in Puerto Rico was very productive. “We were so busy I didn’t even have time to see my family,” she said. Over the weekend, Sra. Agront-Hobbs and the committee discussed what teams they want to invite and procedures that athletes will need to follow in order to compete. They also talked about the steps they need to take after the application is filled out, such as finding a sponsor.

The committee also visited two sites that were prospective locations and chose one of them that, in the eyes of Sra. Agront-Hobbs, is “amazing.” It can fit over 12,000 people and has a retractable roof so the athletes can compete rain or shine. They met with the mayor of the town and she was very supportive of the meet, offering police officers and anything else that might be needed.

Sra. Agront-Hobbs has truly enjoyed the process of planning the meet thus far. The June meet is going to be great exposure for the athletes competing. The event will attract people from across the globe, which will be a great money maker for Puerto Rico as well.