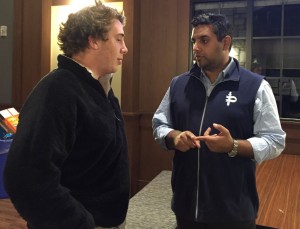 Three years in the running, the Pace Academy Social Entrepreneurship Challenge is off to a promising start. Although the program is relatively new, it has come a long way since its beginnings. The program was started by Mr. Hattori and Ms. Anderson in 2013 with only a handful of students initially participating. The winner from the first year, Scootle, was recently released on the app store. Now, with leaders Faraz, fellow Pace dad and self-made entrepreneur, along with Mr. Hattori and Mr. Sandoe, students attend monthly meetings and discuss financial projections, the company’s “secret sauce, identifying and sizing up the competition, and other aspects of becoming an entrepreneur.

Around nine teams are left in this year’s competition, all of whom have remarkable ideas that range from transportation, storage and production of food, with food being the Isdell Center for Global Leadership’s theme for the year. Mr. Hattori described the initial pitches in December as “having a wide variety of ideas, from apps and technologies to products and services.” “I definitely think we have a number of winning ideas and the key will be for the groups to flush out the logistics of their idea and demonstrate the economic viability,” he said.

Now, in the last few months of the challenge, teams will need to focus on “honing their idea and creating a final presentation,” said Mr. Sandoe. With the final pitches in April approaching, Mr. Sandoe hopes that “teams will be as close to the finished product as possible, even though someone’s final pitch in April is most likely going to be tweaked and changed.”

One of the remaining teams, with sophomore members Sam Delman, Harrison Lewis, Michael Simon and Jack Wray, is creating a nutrition app. But teams tend to show their competitive side, as Harrison notes that he is “currently unable to share their complete idea and name of the product,” for fear of another team stealing their invention. They chose to participate in the challenge because “it is an interesting and unique opportunity to learn about being entrepreneurs in the future,” said Jack.

With their nutrition assistance app, they hope to promote healthy eating and decrease obesity in America. It has involved lots of hours of researching and meeting with nutritionists, but they hope that all of the hard work will pay off. “In the next few months, our goal is to work with doctors to promote the app in doctors’ offices,” said Sam. Harrison shared that the hardest problem he’s encountered while working in a small group is “working together and channeling Jack Wray and Samantha Delman’s love.”

Other teams, such as the duo of sophomores Sloan Wyatt and Canon Lynch, are creating an app that targets people with eating disorders. Meanwhile, juniors Landon Goldstein and Ben Siegel are working with UV lights to determine whether they can sterilize food, thus preventing more food-borne illnesses.

Students in the challenge will not only become better versed in the business of entrepreneurship, but also have the chance to make their dream a reality, whether they win or lose in the competition.