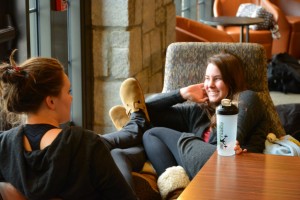 After the whirlwind of first semester, college applications are done and grades are out.  Seniors everywhere rejoice – they are almost at the finish line, and it is time to relax! Not so fast. There is still work to be done, projects to be made and AP tests to be taken. While most seniors feel done and satisfied by now, teachers are not ready to take their feet off the gas pedal. It is the most dangerous time of the year for seniors. Senioritis is kicking in.

Senioritis is an annual occurrence when seniors and their grades suffer due to lack of motivation. Because most seniors either know which college they will attend or have finalized their applications, they do not feel the need to continue working in high school. According to senior class president Frances Crisler, the effects of senioritis are “crippling.” She asserts that the hardest part of senioritis is watching her friends struggle through it, as well. “I know it’s worse for some more than others, but at this point everyone has it – everyone,” she said.

Some of the worst cases of senioritis come from recruited athletes, some of whom have known where they are going to college for months. Considering many athletes decide on a school early in the year, they tend to be fully affected by senioritis by the start of second semester. “I mean, I just want to leave school now that I’m committed,” said senior Tim Coleman, a Furman University football pledge who is also known around school for Freestyle Fridays.

The victims of senioritis are not limited to Pace’s student-athletes, however. Some students, including University of Georgia-bound senior Kyle Orr, have had prevailing symptoms starting as early as last year. “Senioritis hasn’t affected me much because I’ve had the ‘itis’ since junior year,” he said. “We don’t have much work to do in many of my AP classes anyways.”

While students feel a noticeable difference in their effort level, some teachers have not yet seen the effects of senioritis. According to Mr. Whyte, a senior AP Calculus teacher and Dean of Students, teachers usually begin to see a dip in the seniors’ performance after spring break. He strategically plans his curriculum to deal with the dull months of March and April. “My course is deliberately frontloaded,” he said. “I try to cover as much as I can before the final month of school because I think the seniors have a lot going on.” Thanks to efforts by many senior teachers like Mr. Whyte, the impact of senioritis is largely mitigated and seniors always end up surviving the school year.