Just how well do Pace’s cutest couples know each other? The Knightly News tested some of Pace’s most well-known couples, looking for the most compatible. Now it’s time to pick for yourself; which couple takes the crown?

SD: Not even two months, a very short time.

JW: (Counting on his fingers) Yeah, a month and three weeks.

SD: Wait, how do you know that?

KN: OK, OK. What was your official first date?

JW: No, we’re not talking about Music Midtown… Andretti’s?

SD: No, that was like last month! It was before that. When did you come over to my house?

JW: I don’t know the date, but, yeah, I think it was at your house.

KN: Jack, what was your first impression of Sam?

JW: We hated each other.

KN: So who did you both like in middle school?

KN: Who wears the pants in the relationship?

JW: We’re so competitive. Both of us.

KN: What about Sam’s?

SD: We literally Snapchatted about it this morning!

SD: Um, somewhere that has fries?

JW: I swear if you don’t get this!

SD: You do. It’s such a basic one, too. It’s arachnophobia [fear of spiders].

KN: If Jack could meet anyone in the world, who would it be?

JW: You should get this.

SD: What’s that basketball player’s name? Why don’t I know it? Give me a hint.

JW: A hint?! OK, hold up, I don’t want to give it away… Possibly the best player to play on the Gonzaga basketball team.

SD: I don’t even know what that is.

KN: What was your official first date?

GF: First date? Does you picking me up from Jack Walsh’s house count?

JH: That’s not really a date. No, it was in late August. We went to see “Minions.”

GF: I like that I can be myself around her, and she’s very nice to me.

KN: What’s the most romantic thing Gunnor’s ever done for you?

JH: (Looks to Gunnor) What are some things you’ve done?

JH: Well, he bought me a necklace for Christmas.

KN: You’re both exceptional athletes on the field: Gunnor with football and Jessica playing soccer. Do you guys go to each other’s games?

GF: She won’t let me go to hers! I literally ask to go, and she won’t give me the address.

GF: I would to see you, though.

JH: It changes by the day.

KN: If Gunnor could go anywhere in the world, where would he go?

KH: Do you know hers?

GF: Um, probably someone coming up behind her when she’s brushing her teeth and her seeing them in the mirror.

KN: What was your first date?

JD: We went to Taco Mac.

JD: I just think it’s funny when she roasts people.

KN: What’s the most romantic thing Jack has ever done for you?

PW: When he asked me to Prom last year.

KN: What was your first impression of Jack?

PW: I thought he was awkward.

PW: I don’t really have a favorite song…

PW: I don’t know. Probably you.

KN: If Jack was stranded on an island, what would he bring with him?

JD: What would I bring with me? 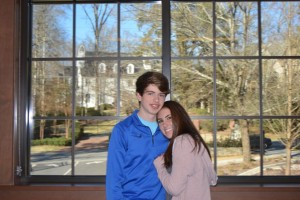 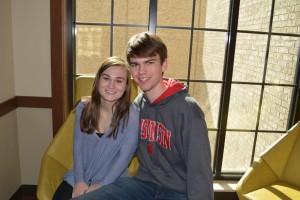 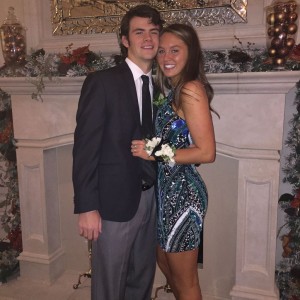 Power couple Gunnor Faulk and Jessica Haidet rock the Academy both on and off the field. Photo: Sloan Wyatt