Feb. 7, 2016 is a very special date in the lives of many sports fans: Super Bowl 50. This year’s Super Bowl features the Carolina Panthers and the Denver Broncos, both division champions and number one seeds in their conferences. The opening line of the Super Bowl has Carolina winning by four. Both teams have dominant defenses. However, the Broncos offense has been inconsistent all season long while the Panthers have the highest scoring offense in the National Football League (NFL) during the postseason.

Carolina dominated the Arizona Cardinals on Jan. 24, blowing them out 49-15. The commanding Carolina defense had Carson Palmer, Arizona quarterback, rattled right from the start of the game. Palmer threw four interceptions, one of which was returned 22 yards by Carolina Pro-Bowl linebacker Luke Kuechly for a touchdown. Meanwhile, on offense, Panthers quarterback Cam Newton picked apart the Arizona defense for two passing touchdowns and two rushing touchdowns.

Denver shocked many people in their win over the Patriots on Jan. 24. Denver’s defense, the top ranked defense this season, forced Tom Brady into throwing two interceptions and held his completion percentage under 50%. On offense, Peyton Manning took great care of the ball, throwing two touchdowns and no interceptions. The Broncos looked more than impressive in their win and are gaining momentum for the Super Bowl.

While the Broncos looked good in their win over the Patriots, the Panthers are the safe choice for Super Bowl 50. Their number-one ranked offense and their number-seventh ranked defense are going to be too much for the struggling Broncos offense. Peyton Manning will have a tough time getting his passes off, and Cam has destroyed every defense he has faced this year. 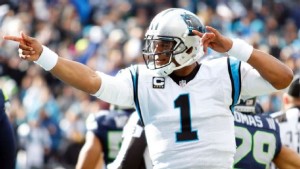