The junior class chose “Star Wars” for their Spirit Week theme, which was a bit controversial given that the Class of 2012 chose that as their theme for Spirit Week 2009. However, the juniors did an excellent job with their decorations, video and dances, proving that “Star Wars” was an excellent choice. The leads were Michael Chen (Yoda), Emma Downey (R2D2), Willie Lieberman (C3PO), Will Movsovitz (Obi-Wan Kenobi), Ben Siegel (Luke Skywalker), Brian Sloan (Darth Vader), Sammy Tannenblatt (Han Solo), Alexis Wilkins (Princess Leia) and Mitchell Zwecker (Chewbacca).

In the morning dance, Brian killed it, hitting the “whip,” the “Quan,” and even the “dab.” Later that day, the juniors revealed a fantastic banner decorated with all the main characters in the “Star Wars” movies, including an incredibly well-drawn C3PO. In the afternoon skit, the junior class really took their dance moves to the next level. There were even more whips and dabs than the morning dance, and the revelation of junior class dean Mr. Hattori, who was disguised as a storm trooper, in their skit drew enthusiastic cheers from the audience. The juniors also did an incredible job designing their costumes, specifically Willie’s C3PO costume; Willie was dressed in a metallic gold jumpsuit and had her face painted gold. Overall, the juniors did a spectacular job with Spirit Week.

On the morning of Friday, Jan. 8, students arrived to school curious as to what the seniors’ Spirit Week theme was. As students pulled into the Pace parking lot, they found Christmas trees in some of the parking spots. The seniors had set up many different Christmas decorations in the Gardens, including a path of more Christmas trees framing the entrance of the Arthur M. Blank Upper School. Finally, in the Inman Center, students found a huge cutout of Will Ferrell in an elf costume, and the theme was obvious: it was the children’s movie, “Elf.”

Later in the day, the seniors unveiled their enormous banner, which displayed pictures of the North Pole and Buddy the elf in New York City. It was well-drawn and fascinatingly realistic. The seniors also excelled in their skit, leaving the audience in awe of their fantastically choreographed dances and dominating their last ever Pace Academy Spirit Week. “There is definitely something special about the last Spirit Week,” said senior Lindsey Schrager, choreographer of many of the senior dances. “You got to leave it all out on the floor.” 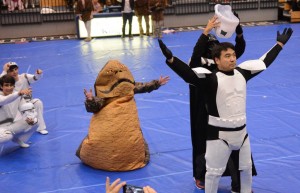 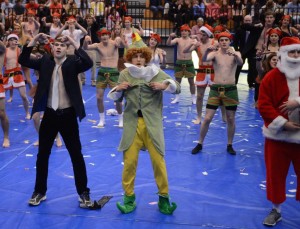