Let’s Get Real with Augustine Whyte 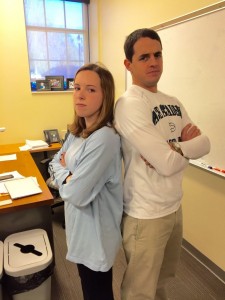 It’s 9 p.m. on a typical Wednesday night. The blackness of the outside world envelopes the Arthur M. Blank Family Upper School. However, a lone light from the office of Mr. Augustine Whyte penetrates the velvety darkness. At his desk, the Dean of Students reviews the day’s misconducts: dress code violations, tardies and the occasional insubordination in Ms. Smith’s class. The position of Dean of Students can often be unglamorous, and the dark lines underneath Mr. Whyte’s eyes show that he hasn’t eaten, slept or watched the Buccaneers’ month’s installment of “Let’s Get Real.”

Brian Sloan: What do you think of  your infamously dubbed nickname “Benderman?”

Gus Whyte: To be frank, I don’t like it one bit, though it is better than “Fantine” from Les Miserables. The Augustine name has been a symbol of Tampa excellence for years, and it should not be tarnished.

BS: Before you were Dean of Students, you used to be a fun-loving guy. What remains were you able to salvage of your social life?

GW: I still love tossing the pigskin around with my roommate Scott; however, there are rules and I need to enforce them. When I do have time, though, I put on my leather jacket and go and play darts with the boys.

BS: Do you believe that math is a conspiracy orchestrated by the government in order to turn us into mindless drones?

BS: I hear you are a collector of various soaps. Please tell us, how did you get so involved in the art of soap making?

GW: In my youth, my papá and I would often roam around the countryside visiting local soap huts.

BS: Last week during PAPUBA, Kevin “Like Mike” Ballard reportedly dropped a triple-double on your head. How do you plan to return after such a poor performance?

GW: No one can stop that man when he gets in the zone. The real matchup, however, is between Mr. Smith and Pete “The Round Mound of Rebound” Pope.

BS: What do you consider your guilty pleasures?

BS: In a separate interview, France Dorman claimed that you are a hero of modern-day photography. Is it true that you discovered the golden angle?

GW: I can’t take credit for discovering it, but I do utilize it whenever I can.