Girls Basketball on the Rise 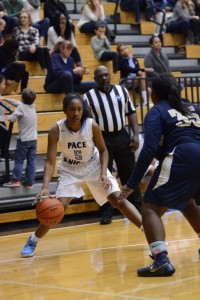 The Pace girls’ basketball program has historically flourished, with numerous playoff appearances and college signees to its credit. However, following a down season last year, the expectations for the team were mixed for this season. The squad’s inexperience is evident upon browsing the roster: six freshmen and three sophomores out of fifteen total players.

Nevertheless, under the direction of new head coach Dr. Troy Baker, and the leadership of the sole senior, Dori Greenberg, the team has found a groove. They have nearly matched their league win total of last year midway through the season, with a 5-10 overall record and a 2-6 record in league play. While this may not be glamorous, there is a more long-term approach in the team’s mentality. “Coach Baker always preaches that it’s a marathon, not a sprint,” said freshman Joelle Zelony. “The progress that we have made has been nothing short of amazing.”

The youth of the team, a perceived weakness, have excelled in spite of the growing pains associated with playing alongside upperclassmen. Among the freshman standouts are Ann Rafeedie, Kayla Ross and Joelle. All have been crucial to the team’s recent successes, accounting for a large portion of the offensive output and the tough-nosed attitude on defense.

That is not to say that the upperclassmen have not carried the load as well. Dori and juniors Mckenzie Baker, Julia Ross and Zoe Weitzner have contributed to the leadership and tenacity of the team, along with their talents on the court. Coach Baker remains pleased by the team’s performance. “I’m impressed by the level of energy and hustle that our girls bring on a daily basis,” he said. “They have been charged with the responsibility of establishing an identity for the girls basketball program, and I’m proud of the way they have taken ownership of the process. We play tough, and we play together.

The remainder of the season represents a meaningful stretch, both for now and the future. Currently, the Lady Knights rank fifth in the region and have gained momentum en route to the Region 6-AA tournament. Under GHSA guidelines, the top four placers in the tournament advance to the state playoffs, which Pace has not made since 2014. The future looks bright, with the players having completely bought in to the process. “This season has been so much fun,” said Ann. “We are continuing to grow as a team, and are improving every day. Coach Baker is awesome and makes practice worth going to. I love our team, and we are heading towards something special.”

Look for the Lady Knights to make some noise, sooner than later.