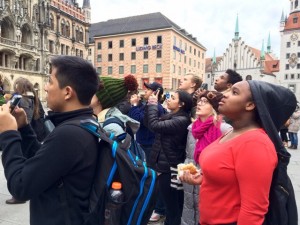 Following the exhausting yet fun Spirit Week, eight Pace students embarked on their journey to Germany Jan. 9-17. Beginning their tour in Munich, the group was able to take in all that the wonderful city had to offer. Starting off at Mr. Hornor’s favorite pastry shop, and then taking in much of Munich’s historic artifacts, the students made their way to the opera followed by a tasty dinner to celebrate senior Payton Gannon’s 18th birthday.

In Munich, students explored the Bavarian culture and took in lots of the Baroque and Rococo architecture. “I really liked Munich,” said junior Jibril Sadiq. “It was like the comfy town that you walked around and got a pastry in the morning and said ‘hi’ to people on the streets. It was very homey.”

With Munich as a home base, students took a couple of day trips to various sites. The second day of the trip consisted of an early morning resulting in a tour of the Neuschwanstein Castle. “It was such a big thing back in 1869 when it was built,” said Jibril. “It was very developed compared to other things in the area.”
Later in the trip the group visited the Dachau concentration camp, which is something that sticks with many students forever and is very meaningful to most. “Being in Dachau, feeling the cold and seeing the brutal pictures and the gas chambers was hard to endure,” said junior Ramiro Juarez.
With freezing temperatures and high winds, much of the walking portions and tourist aspects of the trip were challenging, but the students stuck through it in order to get the most out of the history as they could. “It was really cool to actually see the artwork that we have been studying in Art History [class],” said senior Lali Zamora.
As their time in Munich came to a close, the group boarded an overnight train to Berlin, the country’s beautiful capital. Some of the highlights included: the Brandenburg Gate, Checkpoint Charlie, Hitler’s bunker, the Reichstag, the Pergamon Museum and the Berlin Philharmonic. “It was surprising how much Germany as a country has changed since World War II,” said Jibril. “There used to be huge buildings four blocks long that were destroyed and now have been converted into apartments and other markets so that you can’t even see the history anymore.”