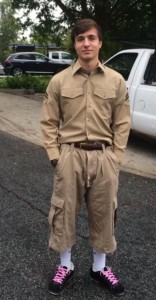 When the NFL playoffs kicked off, most fans were excited for the “win or go home” situations; however, some fans were disappointed as the playoffs were a sign of the end of a fantasy football season. “It was a getaway from my struggles on the actual football field,” said sophomore Gavin Guest, a member of the varsity football team. “Although some see the fantasy football obsession as childish, I take fantasy football as a way of life.”

The most recognizable aspect of the fantasy football season is the weekly punishments and the end-of-season punishments. These ranged from bad outfits, horrible haircuts and eating suspect food. The Donkey Kong League, a group of junior guys, was won by Will Movsovitz. The lowest scorer of each week was forced to wear a red “Lake Tahoe” turtleneck, Merrells and long cargo khakis. The outfit was most often worn by Josh Simons, who struggled to gain fantasy points this year.

The Treehouse League, another junior guy league, featured some of the worst outfits. Whether it was John Propst wearing a revealing devil costume on Halloween or Rob Warren rocking a suspect boy scout costume, the student body could always rely on The Treehouse League to come up with new, funny costumes every week. “Even though Parker [Berman] came out with the overall win, I’ll be back stronger than ever next year,” said junior Tom Phillips.

Of course, the most famous punishment was the “grandpa haircut” given to senior Ethan Freishtat, the overall loser of The League of 2016. The league consisted of twelve seniors who fought till the very end to avoid the unfortunate punishment. The championship game involved Andy Bainton and Kyle Orr, resulting in Andy upsetting the favorite while taking home the championship crown for the second year in a row. “It was a tough matchup going into it, but I was confident my team would come out with the win,” said Andy.

Now that all of the fantasy football seasons are finished, the question that has come across over 75 million Americans’ minds is, “What can fill the gap left by the end of this fantasy football season?” A new fantasy obsession is an obvious choice, and fantasy basketball is a popular new distraction. The most sensible option for a fantasy football guru is to look the 2016-2017 season, and start to scout incoming rookies, the release of the NFL team’s strength of schedule, and the new homes of impact players such as Alshon Jeffery and Doug Martin, whose contracts will expire this summer.