Despite Allegations, Pace Plays by the Rules 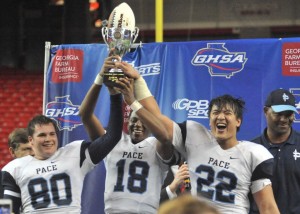 A renowned aspect of the Buckhead area, rumors have swept across the neighborhood schools for years. Although they are usually all in good fun, like all things, they can often have little basis in actual facts. As GHSA 6AA State Champions, Pace Academy has recently come under fire for accusations of illegal recruitment, including hostile targeting on social media by other rival schools.

By GHSA standards, recruiting is defined as “the use of influence by any person connected directly or indirectly with a GHSA school to induce a student of any age to transfer from one school to another, or to enter the ninth grade at a member school for athletic or literary competition purposes, whether or not the school presently attended by the student is a member of the GHSA.” This definition suggests that no representative of a GHSA school may initiate contact with a student athlete at another school. The student must first initiate contact with the school in genuine interest and apply for admission through the school’s admissions program before any official enrollment.

Violations of these rules can hold consequences as severe as to cause the student to forfeit eligibility for one year from the date of enrollment. “If a kid calls us first, then you’re allowed to open up a relationship with that person and talk to them in any capacity that you want to. All that’s required is that they must initiate contact,” said Mr. Gannon, Head of the Upper School at Pace Academy. “We document all of that.”

Not only does Pace Academy document every phone call accepted or initiated, but the athletics program has never once had to provide evidence or had an official investigation launched against them at any time for a violation of GHSA rules. “We have never had any situation where something didn’t look right,” said Dr. Baker, new Director of Athletics at Pace Academy. “Nothing even like a formal investigation has ever come across us.”

Making sure to avoid even the possibility of a violation with Pace’s admissions policies, there is an annual training held by the office of admissions during pre-planning week in the summer, prior to the start of school, where Dr. Baker and the entire coaching staff reiterate the GHSA rules and sign a document stating that they will follow each and every single GHSA guideline. Moving up to AAA in the 2016-2017 football season, Coach Baker will speak with every coach in detail about the newest policies and how to stay in compliance to those rules.

In addition to that, Pace ensures their program’s integrity by reinforcing the relationship between the admissions office and the coaching staff. “Part of what our Admissions office has been able to do successfully is support our coaches in what we know is a situation where people are approaching them because they are interested in playing a sport and making sure that the coaches are directing those families back to our offices,” says Associate Director of Middle and Upper School Admissions, Ms. Brown. “We are very clear on how every applicant has the same process and they have to start that process through us.”

By GHSA regulations, Pace Academy has not committed any illegal recruitment and furthermore has not even been approached by formal investigators to provide evidence to defend that position. After all of the rumors spread around Buckhead, how should a student react to these allegations and the antagonism found on social media? Though the Pace Knightly News Staff understands that it is important to keep its mass audience well-informed, it is important to stress that the best way to extinguish a fire is to not feed it.

Under any circumstance, whether it is online or in person, one is always representing the Pace community. Rivalries can be a fun element that can make school events even more lively and entertaining, but going forward, don’t let these rivalries get the best of one’s behavior. “There should not be a response,” said Mr. Whyte, Dean of Students in the Upper School and varsity cross country coach. “Rivalries are great and I think the social media stuff comes with the territory. When you win a state championship, you’re going to become the one that everyone is attacking, but don’t respond.”

With a fantastic beginning to the year at Pace as football state champions, there are high hopes for the rest of the sports teams finishing up in the winter and the ones to compete this spring. Nevertheless, in the event of great successes or failures, remember to represent the Pace family well and treat all other teams with the utmost respect. “If you have success, you’re going to have haters. Just keep it on the field,” said Mr. Sandoe, Assistant Dean of Students and varsity football assistant coach.