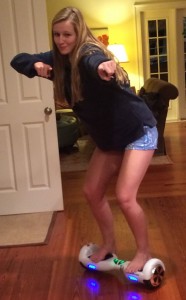 Hoverboards were hot gift items this holiday season, but caused more heat than necessary. Literally. With their tendency to catch fire, whether in motion or in the process of recharging, hoverboards have created life-threatening hazards. According to a Jan. 4 tweet by the U.S. Consumer Product Safety Commission, the agency is investigating 28 reports of hoverboard fires in 19 states. Hoverboards have positively and negatively impacted lives across the globe, especially here in the Pace Academy community. “Walking is for the weak,” says junior Kate Bethel about her love of hoverboards.

What exactly is a hoverboard? Hoverboards are self-balancing boards used for personal transportation. The horizontal board (similar to that of a Segway) is set on two wheels and has two foot pads. One foot starts the engine and the other foot maneuvers the hoverboard. Weight transfer controls the speed of the hoverboard and steering involves slight movements of the feet, ankles, and legs in the direction you wish to move. As a result, a level of balance is required to operate these highly popular devices, yet not enough that it hinders anyone from trying to ride one.

Hoverboards have a futuristic-like appeal, for the operator glides across the ground with little effort, rolling up to speeds of 10 miles per hour, as if from a “Back to the Future” movie. “My favorite part of owning a hoverboard is being able to minimize the amount of energy I exert each day,” said senior Mick Assaf.

So why are hoverboards such a safety concern? The main issue is their use of rechargeable lithium-ion batteries. When charged incorrectly, damage can occur within the battery until the amount of heat energy released ruptures the battery. This hazard occurred with the Strathmore family in Melbourne, Australia. They left their hoverboard to charge only to return to their home in flames.

It is vital to check which batteries the hoverboard uses and how reputable the source of purchase is before buying one. The cheaper the battery, the more prone it is to short circuit, where the cathode and anode ends of the battery flow through a damaged separator in the middle. Since destruction from hoverboards can be severe, more than 30 colleges have banned them from campus and the United Kingdom has entirely banned hoverboards from public places. Also, all major United States airlines, including Delta, American and United, now prohibit hoverboards on planes from carry-on and checked baggage.

But the dangers have not considerably hindered the popularity of hoverboards, with skyrocketing sales across the globe. Many companies have tried to alter their hoverboard products to make them safer, such as the GoBoard, which uses batteries that are verified by the UL. As a result, hoverboards are a growing presence in our lives, perhaps leading us on path where walking is no longer commonplace.