After the show-stopping performance of the fall musical “Legally Blonde,” directed by new Pace Academy Theatre Director Sean Bryan, Mr. Bryan yet again wowed the Pace community with this year’s very first Winter Showcase Jan. 28-29. “This is a tradition that I’m hoping starts to pick up some speed for next year,” he said. The winter performance date is difficult for a lot of students.”

With slim time commitments and challenging schedules, Mr. Bryan felt that to produce a play in its entirety was nearly an impossible task. He saw the Winter Showcase as a more contemporary and practical idea, and what a remarkable job he did. With marvelous acting, casting, directing and sets, this year’s winter production set records in both creativity and talent. Considering all of the other time commitments that students faced, such as exams, winter break, sports and other obstacles, it was quite a success.

For the showcase, the layout was particularly distinct. Each scene was taken from plays such as “The Shape of Things” by Neil LaBute, “The Philadelphia” by David Ives and “Doubt” by John Patrick Shanley, and then performed in four different locations. To and from these different locations, the audience circumambulated around in groups of four from the stage, lobby, chorus room and band room; each room was the setting for their own two or three scenes.

The showcase was not directed solely by Pace faculty. This year there were three student directors. Seniors Jack Eichenlaub and Jared Goldman along with freshman Annabelle Critz all directed an individual play.

One of the greatest advantages of performing a showcase is the wide range of emotions that can be portrayed. Whether it was endless frustration sparked by a DMV lady in “DMV Tyrant” directed by Jared, the comedic energy produced by a repeatedly failing romantic pursuit in “Sure Thing” directed by Jack, or even the palpable intensity and grief felt over the loss of a parent in “Proof” directed by Mr. Bryan, the audience felt the strength of every scene. In fact, one of the skits was even original. “Violet Fools,” a play portraying the anger and sadness of forbidden love, was not only written, but conceived by, Annabelle.

Another fine trait of the Winter Showcase was the newfound intimacy with the audience. Unlike most plays or musicals Pace has produced, each sketch was executed in very close quarters. This experience allowed for the audience to truly connect with the actors on stage, and effortlessly understand the messages they were trying to convey.

In addition to the intimacy, the casting was perfect for each individual role. Veteran thespian and senior Tory Dancu got the opportunity to portray a very mournful role, despite her well-known bubbly personality. She played the part of Catherine in “Proof,” as a woman grieving over her dead father. There were also some new faces taking their first shot in a Pace upper school play, such as freshman Margaret Bethel, who portrayed concerned sister June Reedy in the play “In the Forest of Gone” by Don Nigro. Other strong crowd favorites included junior Willie Lieberman and freshman Alex Allen’s serious performance of “Doubt,” and the flirtatious comedy between senior Brad Rubin and Annabelle in “The Shape of Things.”

With palpable energy, incredible talent and engaging sets, Pace Academy’s Winter Showcase was an absolute hit. Individually, each play was more enticing than the next, and left the audience giving a standing ovation with the final bows. 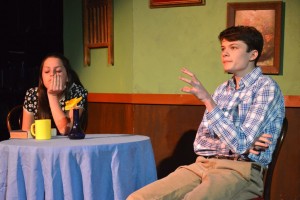