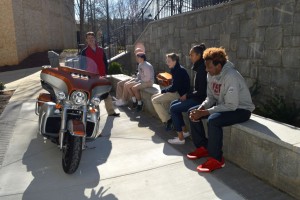 After winter break, Pace students look forward to coming back to two unique traditions: Spirit Week and Minimesters. Before exams in December, science department chair and basketball coach Jonathan Day sends out a list of the minimester classes available for students to choose from. Starting the first day of second semester, students attend their minimester class in place of their regular science class for an 8-day rotation. This year, Pace teachers introduced several new classes out of 15 total offerings. 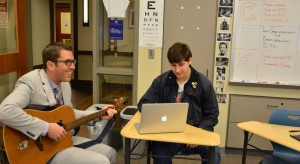 Chemistry teacher Stephanie Harrell introduced the popular Stress Busters minimester. In the class, Ms. Harrell discussed the physical reaction in a person’s body when they are stressed. The students engaged in methods of beating stress such as meditation, yoga and exercise, according to freshman Abigail Lund. “We did a really interesting experiment where we split into groups and each went through a packet of jokes,” said Abigail. “One group had to smile while reading them, and the other had to frown. The smiling group almost always thought that the jokes were funnier than the frowning group.” Ms. Harrell also stressed how meditation can be very useful to aid people in peacefully combatting stress throughout their life.

Chemistry teacher and football coach Joe Sandoe had one of the largest classes this semester. He brought together his passion for both science and football and offered a Football Strategy minimester. In this class, students went through the basics of football, defense strategies and offensive strategies. On days 4 and 5, Mr. Sandoe broke the students into “coaching staffs” to design an offensive playbook. On day 6, these groups actually “drafted” students who were in that free period for a touch football competition.

The class watched film of Pace games as well as games from Mr. Sandoe’s previous school in Pennsylvania. “I hope the students can now watch a football game with a little bit more knowledge about what’s going on and how the offense and defense are trying to strategically out scheme each other,” said Mr. Sandoe.

English teacher Bailey Player introduced a Songwriting minimester, where students discussed the process behind writing a song. Students chose their favorite songs to play for the whole class, and Mr. Player asked everyone listen with an open mind and write down what they heard or felt behind the melody, beat, lyrics and production of the song. Towards the end of the 8-day rotation, Mr. Player brought out his guitar and some lyrics he was working on for the students to finish. The class came together and completed a song with verses, a pre-chorus and a chorus.

AP Biology teacher and 11th grade dean Thomas Hattori introduced a minimester on poker statistics. The goal of this class was to learn about the probability of poker and different games. Students learned statistics and probabilities of being dealt different hands. Not only did the students have the opportunity to learn about poker, but they actually played a few games, including Omaha, Texas Hold’em and 7 Card Stud.

Mr. George Sokolsky brought his personal motorcycle onto Pace’s campus for his minimester, Get Your Motor Runnin’. His goal for this class was to teach the students the safety, history, culture and even science behind the “world of motorcycling,” according to the FirstClass preview of the minimester. Each day, students learned something new about the motorcycle experience. For instance, in one class period they learned safety, and in another class they learned about different types of motorcycles. “On the first and last day of the minimester, Mr. Sokolsky brought his motorcycle to school,” said junior Summer Brown. “He showed us the different parts of the motorcycle and even let us sit on it.”