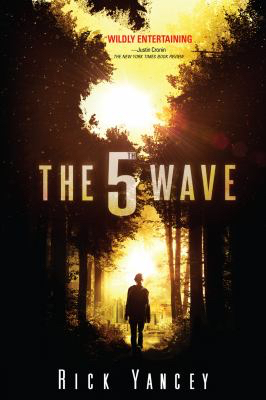 ‘The Fifth Wave’ is the first book in a trilogy by Rick Yancey. The movie based on the book opens in theaters Jan. 22.

Young heroes, romantic twists and alien invaders. What more can teenage readers ask for? “The 5th Wave” by Rick Yancey takes a similar futuristic approach for young adult reading, but the quality and complexities within the story are much more riveting and intriguing than expected. This book does an admirable job of keeping the reader on their toes in an uphill battle against alien invasions and the intricacies of human minds and emotions.

Cassie Sullivan is just like every other 16-year-old girl, crushing on the cute quarterback Ben Parish and attempting to stay awake in calculus class. Yet what Cassie and the rest of the world were not expecting is that a mysterious airborne vessel would choose to inhabit Earth – but not before exterminating the entire human race. These alien invaders, known to humans as “the Others,” have been studying humans for their entire existence, making their killing process more complex and unexpected.

Their extermination process has five waves: darkness, destruction, infection, aliens occupying human bodies, and a fifth wave that is discovered within the climax of the book. The Others are not playing easy as they round up children to train as soldiers and invade their minds to control their thoughts and emotions. The story follows Cassie as she fights to save her only remaining family member, baby brother Sam, from the Others. Along the way she meets the handsome Evan Walker, who teaches her more about trust and keeping promises.

This book perfectly captures the essence of human beings, especially amidst the fear of death. Cassie must struggle with not only surviving against all outside forces, but also against her internal struggle and will to live. Yancey expands upon how humans truly view themselves and how they must make difficult decisions in order to preserve what matters in the world.

What is most intriguingly depicted is the way in which the aliens strive to defeat humans by destroying their humanity. After killing 90% of the population with natural disasters and disease, the Others seek to take down the remaining humans from the inside out by inhabiting their minds and bodies. Readers become engrossed in the self-doubt that controls Cassie and what eventually is shed because of her internal desire to keep a promise to her brother. Promises are what bind humans together, and breaking them only destroys the trust and humanity which lies inside.

Read “The 5th Wave” to discover how hard Cassie is willing to fight and to see how alien mind tricks will play out.  The movie based on the book opens in theaters today, Jan. 22, starring Chloe Grace Moretz and Nick Robinson.