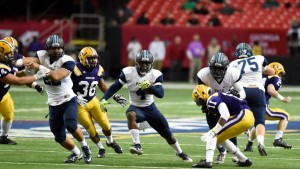 The Road Warriors finally returned home, and the Pace Academy Knights (13-2, 5-2 region) delivered the first-ever state title of the football program’s short history in front of a raucous crowd at the state’s most prestigious stadium, beating Fitzgerald (13-2, 5-1 region) 42-21 in the Georgia Dome on Dec. 12.

Pace was the underdog going into the game, just as it had been against formidable opponents such as Greater Atlanta Christian and Macon County, which they took down with relative ease. Fitzgerald, however, boasted one of the best rushing offenses in the state behind one of the state’s leading rushers, J.D. King, and posed the Knights’ toughest challenge yet.

Pace came out of the gate firing, stopping Fitzgerald’s opening two drives and scoring first on a 35-yard touchdown run by junior Deon Jackson. The Purple Hurricane came right back, though, as quarterback James Graham scored to tie the game early in the second quarter. The Knights then fought their way down the field and scored on a 2-yard touchdown run by sophomore Realus George.

The key moment of the game came when Pace stopped Fitzgerald on 4th down inside Pace territory with 0:38 left in the first half. Sophomore QB Gunnor Faulk led a 62-yard drive that ended in an 18-yard touchdown pass to senior Spencer Hemmingway with 0:03 seconds left in the half to give Pace a 21-7 lead at the break.

Pace got the ball out of halftime, but fumbled on their first two offensive possessions of the half, which set up a touchdown run by J.D. King to bring the Pace lead back to 7. The two teams then traded touchdowns before Pace sealed the deal with two long drives resulting in short touchdown runs from Jackson and George. After George scored to put the Knights ahead by 21, reality began to sink in for the fans. Pace was winning a state championship in football, despite only starting a varsity program in 2008.

As the clock ran out, Pace players huddled around the victorious head coach Chris Slade at midfield before sprinting towards the Pace fan section and jumping into the stands. The captains accepted the trophy on the podium, joyously capping off a remarkable season for the Pace Academy players, coaches and fans.

Faulk finished with 148 yards on 13-of-15 passing for a touchdown and ran for 57 yards on eight carries. The offensive MVP for the Knights was Jackson, though, as the back ran for 114 yards and an astounding three touchdowns. George added 78 yards and two touchdowns for Pace. Senior ‘backers Kyle Orr and Philip Markwalter added nine tackles apiece for the Knights’ defense. Fitzgerald quarterback James Graham ran for 106 yards and a score while throwing for 41 yards, all coming on a long touchdown pass to Montrell Harris.

Despite Fitzgerald coming in as one of the leading rushers in the state, the Pace defense did a fantastic job of limiting Fitzgerald running back J.D. King to only 54 yards rushing and one touchdown. Even though Pace is one of the smallest schools in 2A, the fans packed their side of the Georgia Dome, forming a sea of navy in their “This Is Our Time” T-shirts to combat the wave of purple and gold on the Fitzgerald side. Throughout their playoff run, there was never a moment when Pace really came close to losing to their opponent. Macon County took the best shot at the Knights, keeping their Elite 8 game to one score for most of the game, but Pace kept their cool.

Coming off a state championship, the Knights will have a lot to live up to next season. Moving up to 3A will bring tougher competition, including a matchup against new region opponent and reigning 3A state champ Westminster. Pace will lose 3/5 of the offensive line to graduation, along with multiple key defensive contributors. However, the Knights will return almost all of their skill position talent and multiple starters in the linebacking core and secondary.