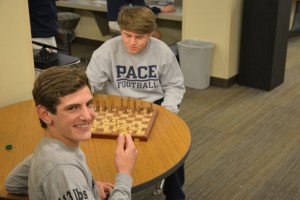 Whether it’s relaxing after getting ahead on homework, or taking a break from studying for a test, the underclassmen use the three chessboards on the lower level of the Woodruff Library to ease their tired minds. Sometimes Pace academics overwhelm students, but Head Librarian Mr. Ball has provided the students with a mental escape. Chess has overtaken the “loud” floor of the library, with most of the competitors consisting of 10th graders desperate for a checkmate. Some games are friendly intellectual match-ups, but a series of intense rivalries has developed.

Sophomores George Shepherd and Chip Ratcliff have skills that have shined on the chess board. George, a quick hitter, uses the four-step scholar’s move, which results in a quick checkmate and bitter opponent. Chip uses his chess background to outsmart opponents, leaving them flustered with the chess magic that just took place.

Although there are mismatched games, either player always has a chance at victory. “Some people see me as an underdog, so I worked hard in the offseason, and now my work has paid off,” said sophomore Walker Harris. Most of the upsets are due to mental tiredness, as games in the early morning are unpredictable. “Sometimes I’m too tired, so I’m subject to dumb mistakes and not noticing when my brother Johnny cheats,” said sophomore Nate Reece.

Not only is chess a great way to exercise the mind, but it also helps students release some of the stress of Pace academics. “It helps me forget school for a minute, and I lose myself in the chess,” said sophomore Joseph Adams.

Even teachers have gotten in on the fun. Mr. Hamburger actively participates in the trash talk. “Are you sulking after yet another lost?” he said recently to sophomore Jeb Carter. Participating in the actual matches, Mr. Whyte dominates most of his student competition. “It’s always frustrating when I want extra help, but Mr. Whyte is playing chess instead,” said sophomore Hannah Schrager. Now Mr. Whyte has mastered double tasking, and helps students with math while he controls the chess board.

Mr. Ball’s only advice on chess playing is to have fun, but make sure you clean up after yourself. If you’re looking for a stress-relieving game of chess, head to the lower library to find an eager sophomore.