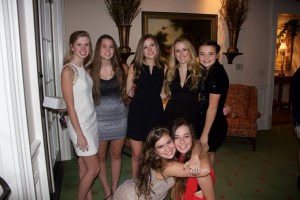 The invitation comes in the mail from Libba Wight, the creator of the Pre-Debutant Cotillion Dance, and it is titled those three dreaded letters: PDC. Panic runs through recipients’ heads, as girls start to consider possible date options.

Tension rises, as bitter fights break out among the ladies, inflicting whirlwinds of gossip and destroying friendships. Some ways to prevent this can be creating a GroupMe with all of the girls, a Google spreadsheet or a Facebook group. Although these at first appear to be beneficial, they usually turn out to be unsuccessful and create even more drama, due to the fact that some of the guys gain access to the “who is asking who” list.

Once the girls decide who to take, they must figure out a clever way to ask their date. Whether spelled out in a box of donuts or Christmas lights, girls spend countless hours researching until the highly-anticipated day comes when they make their “PDC proposal.” Once they ask their date, usually an awkward picture follows. But this is not even near the end of distress.

Now, the girl usually books a hair appointment and must find the perfect dress, which is usually expensive. The dance itself is $350, and the girl must pay for her escort. The costs add up, and the entire dance and its necessities become exhorbitant.

Finally, the day of the dance arrives and everyone makes their way t0 the picture party for way too many photos being taken of them at once. Excited “paparazzi-esque” parents take numerous pictures, the practice of which can become very tiring and bothersome.

The dance itself begins with a seated formal dinner, which can be awkward if you are sitting with strangers from different schools. Then, everyone gathers in a highly crowded room with a band playing out-of-date songs that people must learn to swing dance to. This is incredibly stressful, especially if either you or your date does not know how to swing dance. This goes on for two hours, and when the end of the dance finally arrives,  everyone breathes a sigh of relief.

Although freshmen highly anticipate their first time at PDC, it is usually followed by chaos, and later, disappointment. For example, fewer and fewer people go to the dances during sophomore and junior years because they realize how overrated PDC actually is.

What was once a highly acclaimed gathering is now a hurricane of drama waiting to strike, and you begin to question whether or not it’s worth going to the dance at all. Not only are friendships put to the test, but the night itself becomes a “who wore it best” competition, as girls struggle to find a dress both perfect and unique. The cons definitely outweigh the pros of going to the dance, thus the PDC dances are a waste of time, energy and money. It would be much better and less costly to stay at home.