Pace Students Get Ready to Rock Out 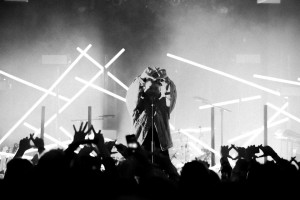 The Weeknd enchants his fans at a concert.
Photo: theweeknd.com

With the end of the year on the horizon, everyone should be partying it up. A plethora of bands are coming to Atlanta soon, catering to all tastes in music. Below are some highlights of the concert scene.

The Weeknd is actually the stage name of Abel Makkonen Tesfaye. Abel originally launched his career by anonymously uploading songs to YouTube. The songs were a hit, and earned him critical praise from multiple magazines such as Rolling Stone. Some of his popular songs include “The Hills,” “Can’t Feel My Face” and “Often.”

Justin Bieber became famous early on in his life while performing on the streets and blah blah blah… Everyone knows who he is. Moving on…

Nick Jonas started off his career in a band called the Jonas Brothers, who are, coincidentally, his brothers Kevin and Joe. Multi-talented, Nick is also an actor who is currently stars in TV drama “The Kingdom.”

Fifth Harmony is an all-girl band with members Ally Brooke Hernandez, Normani Hamilton, Dinah Jane Hansen, Camila Cabello and Lauren Jauregui. They found their way into the spotlight when they competed on “The X Factor,” taking third place.

Shawn Mendes had an unusual debut. He started off on the popular app Vine, playing covers of famous songs. Soon he attracted the attention of a manager and became a star. He plays solo and creates singles that have garnered mass appeal.

Deerhunter, an indie band, plays at Variety Playhouse on Jan. 8.

Starting out in Atlanta, Deerhunter formed in 2001. They are an indie-rock band and have albums full of amazing songs such as “Agoraphobia.”

Madonna, also called the “Queen of Pop,” has won many Grammy Awards for her music. According to Billboard, she is the top touring female of all time. If you’re curious as to why she’s so highly acclaimed, go see her in concert.

Wilco, an alternative band, was formed in 1995. Their first album was A.M. and many more soon followed. They rock the stage and enchant their crowd with lyrics that spin into stories.

After her two singles, Carrie Underwood enchanted the hearts of many country lovers. She dominates the awards in the country genre with her songs. Her album Blown Away earned her a Grammy. “I’m super excited for her concert.” said sophomore Sarah Davey. “She’s a great singer.”

Mackelemore and Ryan Lewis became popular instantly with the release of their song “Thrift Shop.” It quickly hit the top of the charts and launched them into their hip hop career. Come out to their concert if you want to party it up with or without “20 dollars in your pocket.”

Some Pace students are making plans for upcoming concerts and are giddy with excitement. Upon mention of Shawn Mendes’ upcoming performance at the Jingle Ball, sophomore Ibum Obu said, “I can’t wait to see him perform live. I’m going to throw my phone on stage (unlocked) and so he’ll be ‘like did someone leave their phone?’ and I’ll be like ‘me!’ and he’ll be like ‘come up and get it’ and I’ll be like ‘AHHHHHHHHH!!!!!!!”

Fangirls and guys will be jumping for joy the couple next months. Stay safe and make good choices!