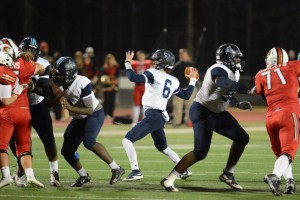 The game started off eerily similar to the last one against Greater Atlanta Christian. Pace Academy (12-2, 5-2 Region) used a couple of long touchdown drives and a few key turnovers to take a slim lead into halftime, just as they did the first time they played GAC (12-2, 7-0 Region) in October. However, this Knights team was not about to let another lead slip away with a chance to play in the Georgia Dome for a state title on the line.

The Knights pulled away in the second half, forcing a total of five turnovers on the night and going on a 31-0 run to win 45-20 Friday night. The game started off evenly, as both the Spartans and Knights traded touchdowns. Sophomore Realus George ran in the first score for Pace from four yards out while sophomore QB Gunnor Faulk found senior Spencer Hemmingway in the end zone to tie it at 14-14. An interception by junior Trey Blount III then set up a 25-yard field goal by senior kicker Samuel Sloman to give Pace a 17-14 halftime lead.

Pace got the ball after the intermission, and the offense went right to work. Faulk found Blount on a double move route for an 11-yard touchdown, and after senior Jean-Luc Brown stripped GAC QB Davis Mills, Faulk took it himself on a 30-yard touchdown run on 3rd-and-23 to give Pace a 31-14 lead. On the ensuing Spartan possession, senior Kyle Orr stripped a GAC running back which led to Faulk finding junior Deon Jackson over the middle for a gain of 30. Jackson fumbled at the goal line, but pounced back on the ball in the end zone for the score and a 38-14 Pace lead.

At that point, the massive Pace fan section began to realize what they had already come to expect: Pace was going to the Dome. Trey Blount put the cherry on top of the cake, as he took a Faulk screen pass 60 yards down the sideline for his second score of the night and a 45-14 Pace lead.

The game really was the perfect storm, as Pace’s efficient and explosive offense complemented the ball-hawking defense that forced those five turnovers. Pace relied more heavily on the passing game than they had at any point in these playoffs, as Faulk went 15-for-21 for 201 yards, three touchdowns and an interception. Blount was the leading receiver, catching four balls for 101 yards and two scores. Jackson ran for 88 yards on 22 carries and George went for 69 yards on 12 carries and a score. On defense, Blount and Jackson had interceptions, while senior Jean-Luc Brown along with Orr forced fumbles.

Sloman broke the Georgia state record for most field goals in a season, as he hit his 20th of the season on Friday night. Despite being the visiting team, Pace seemed to have the bigger and certainly more vocal supporting section. After the handshake line, the entire student section ran onto the field to celebrate with the players and coaches despite the urgings not to by the GAC administrative staff. The Pace team simply seemed to want it more than GAC, as they were fired up throughout the night and pumped up the crowd on several occasions from the sideline.

Junior Mark Sommerville had another great game from the corner position, making several key pass breakups and laying one vicious hit on a GAC wideout. After the game, head coach Chris Slade praised his team, Pace administration and his coaching staff, which he called “the best in Georgia.” He also said that he couldn’t be more proud of his team and told the fans to get ready for the Dome.

Pace will face Fitzgerald (13-1, 5-1 Region) in the Georgia Dome tomorrow at 1 p.m. after the Purple Hurricane beat Jefferson County 40-20 in the semi-final. Despite the relatively close scoreline, Fitzgerald led 27-0 at halftime. Some Pace fans may remember Fitzgerald from last year, as the Knights traveled to Fitzgerald in the Elite Eight round only to lose by a score of 49-21. Fitzgerald ended up losing to GAC in the semi-final. The Purple Hurricane are led by dual-threat quarterback James Graham, who rushed for three touchdowns and added two more through the air against Jefferson County. The game will be broadcast on Georgia Public Broadcasting, www.gpb.org.