“Mockingjay, Part 2” Entertains, Could Have Been Better 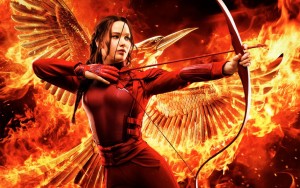 Jennifer Lawrence steals the show for the fourth and final installment of “The Hunger Games” franchise. Photo: TheHungerGames.movie

“The Hunger Games” has finally come to a close with the fourth installment, “The Hunger Games: Mockingjay, Part 2.” This is the sequel to “Mockingjay,  Part 1” which came out around the same time last year. Director Francis Lawrence decided to split Suzanne Collins’ final book in her three-part series into two movies.

While this may have seemed like an easy cash grab at first, it actually allowed for more of the story to be told. “I liked that it was split into two movies,” said junior Sophie Blasberg. “They were able to get more details from the book.”

While this may have been the case, the movie included too many details without fully explaining most of them. I would have been thoroughly confused at many points if I hadn’t previously read the book. However, I saw the movie with junior Eno Reyes who hadn’t read the book, and he loved it.

Like all the other “Hunger Games” movies, the scenery and special effects were outstanding. The way they showed the capital, after months of bombing and war, was eerie yet surprisingly beautiful. President Snow’s rose garden was exactly how I imagined it would look when I read the book. The movie receives five stars for the excellent job done in creating all the different sets.

The costumes were also excellent, especially Katniss’ gorgeous Mockingjay outfit completed with that sleek black bow of hers. Finnick’s costume was also magnificent, as his trident was formidable and lethal. However, I was disappointed with the perception of the “mutts” that chased the squad throughout the sewers. In the book, they appeared more human-like, while in the movie they were presented as alien monsters.

Overall, the movie was very entertaining. The action kept the movie fast paced and the drama of the love triangle between Katniss, Gale and Peeta added an emotional depth. I would recommend the movie to those who haven’t read the book. They can enjoy it for what it is, rather than constantly comparing it to the novel.