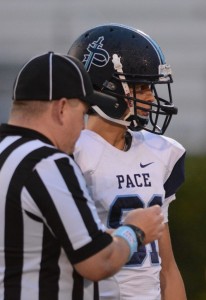 “I just got sandwiched!” said sophomore Jonathan Tennies, known to GroupMe users as the Peruvian Legend, after a physical set in the tackling circuit. Walking away from practice with a deeply bruised arm, the loss of Jonathan will be a major deficit to the squad. While he may not show off his skills on the field during Friday night games, Jonathan has impact off the field for the Knights. “Jonathan ‘Tennessee’ Tennies brings a much needed sense of humor to the team,” said head coach Chris Slade. “And it always comes at the perfect times.”

Arriving at Pace Academy in sixth grade, Jonathan Tennies’ ancestors hail from Peru and Germany. Fluent in both English and Spanish, Jonathan is one of the heads of Pace’s Spanish Club. “As leader, I, along with my other fellow leaders, organize, plan, and carry out many Spanish Club events,” said Jonathan. “These include the Day of the Dead altar and Latin American food tasting events.”

Although he’s attended Pace for a short five years, Jonathan really loves the community. He finds himself participating in many of the clubs Pace has to offer, including Model UN and Pace Academy Board of Diversity. “My favorite part of Pace is definitely running out onto the football field on Friday night,” said Jonathan. “You gotta ball hard every day.”

Jonathan’s football career has been a brief yet exciting one. He exhibits his talents all the time on the practice field. “I am usually put at kickoff return scout team,” said Jonathan. “And I don’t think I have dropped a kick yet.” Aside from football, Jonathan is a member of the Pace varsity swim team and the junior varsity soccer team. During swim meets, Jonathan swims free style, and on the soccer field, Jonathan is a utility player who mainly plays midfield and striker, but can be found locking down the opposing team’s strongest player.

Girls drool over the football phenom that is Jonathan Tennies. “If I had to describe Jonathan in one word, it would probably be dreamy,” said sophomore Morgan McCullough.