Frank Houser Brings Down The House 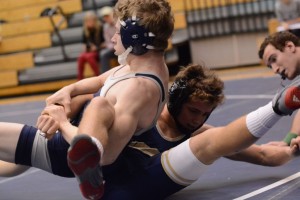 Frank Houser gets the better of his opponent as a freshman during senior night last year. Photo: Fred Assaf

Sophomore Frank Houser is a highly motivated individual with his sights set on greatness. His finely tuned drive has launched his success both on the mat and in the classroom.

After placing sixth in the 2015 GHSA state tournament and earning a record-setting 26 wins in a standout freshman campaign, Frank has high expectations for the 2015-2016 season. Ultimately, his goal is to secure the first individual state championship since Pace alums Owen Smith ’92 and Tom Macklin ’94.

However, he recognizes performance as a product of his intense dedication to perfecting his craft. Wrestling consumes most of his free time during the winter, a sacrifice well worth the potential accolades. “I’m always busy during the season, with practice and homework taking up my weeknights and tournaments taking up Fridays and Saturdays, so I often don’t have much time to hang out with friends,” said Frank.

His wrestling career began in the sixth grade, with Frank citing his need for an after school extracurricular as the main reason for his participation. However, the time spent on the mat quickly ignited a passion for the toughness and grit of the sport. The sensation of winning a match became intoxicating. “Winning is the culmination of all your hard work and that is so rewarding,” Frank said.

The transition from middle school to varsity wresting has been demanding; however, the coaches, along with senior captain Jack Walsh, have been especially helpful in showing him the ropes. Jack, a standout in his own right, complimented Frank on his drive: “Frank does a great job focusing on specifics in wrestling, as well as pushing himself in the room every day.”

The recruiting process has been slow, as Life University is currently the only institution that has expressed serious interest, but Frank is confident that he will have the opportunity to wrestle at the next level. He has no particular preferences in a college; he is simply looking for his potential destination to have “great academics, great coaching and a great location.” With high expectations surrounding the Pace wrestling program, look for Frank Houser to bring the house down and help lead the Knights to a successful season.