Diving (And Swimming) Into New Season 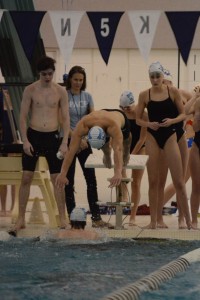 Seniors Madison Graham and Harrison Ray look on as their teammate Cooper Drose ’15, dives into the pool during the 2014-15 season
Photo: Fred Assaf

Water splashes, whistles blow and coaches yell as the Pace Academy varsity swimming and diving team undergoes another grueling practice. Swimming and diving, one of the most tiring sports, has been a huge success at Pace in the past few years.

With college-level talent such as Gwynnie LaMastra ’14 who swims at Johns Hopkins University and Harrison Moncino ’15 who joined Miami University’s (Ohio) diving team after winning three consecutive state titles, there is no lack of exposure to greatness. The swimmers and divers will look to their ten seniors, including year-round swimmers Brenner Appel, Grace Ferry and Madison Graham, and diver Owen Moncino, brother of Harrison, for continuing the legacy this season.

The team this year brings extensive swimming and diving talent to the table. In the state championship last year, the Pace boys school record was broken in 500 free by junior Connor LaMastra and 400 free relay by Cooper Drose ’15, Mark Grenader ’15, junior Alex Kaye and Connor. The boys finished fourth in AA and 19th overall at the state meet.

The Pace girl swimmers finished first in AA and 10th overall at the state meet. The girls school record was broken in the 200 IM by Madison, 500 free by Grace, and in the 400 free relay, by senior Anna Van Zyverden along with Brenner, Grace and Madison.

Continuing the Moncino legacy, Owen brings great diving talent to the boys side of the team. The Moncinos have dominated diving at Pace since Middle School, and now being able to stand alone in the spotlight, Owen will continue to show off his skills in his senior year. “Watching Owen in practice is really cool, because he is one of the best divers I’ve ever seen,” said sophomore Melanie Crawford. Owen has already decided to take his talent to the D1 level, committing to Texas Christian University in late October.

Along with Owen, the Kayes (Alex and Charlie) and Jenkins (Jake and Andrew) will bring a dynamic junior-freshman brother combination to the AquaKnights. The mixture of standout seniors and promising freshmen will excite everyone involved with the boys varsity swimming team.

Grace is a standout swimmer for the girl’s team, and has been since she arrived freshmen year. After breaking school and personal records last year, Grace will look to leave her mark on the team. “I enjoy swimming for my school, and hope to use skills from club swimming and school swimming to continue swimming into college,” she said. Grace has verbally committed to swim at The University of Pennsylvania next year.

Brenner is ranked as the 57th best swimmer in Georgia by CollegeSwimming, and will take her talents to Davidson College in 2016. Dominating in the breast stroke, free-style and individual medley, Brenner finished out the season strong in the Georgia state championships in 2015 as she helped break a school record.

The talented core of seniors will look to lead and set examples for the younger members of the team. “They all will make a huge impact on this year’s team and do an excellent job of getting their teammates ready to go,” said head coach John Ague. Look for the AquaKnights to make history this season.