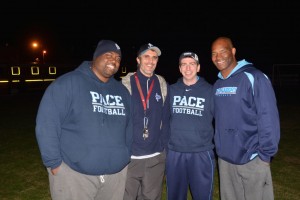 Amid the iron bars, restrictive bands and students pushing themselves to their physical limits in the Pace Academy weight room, you will find the famous strength and conditioning coach Clement Rouiviere. The coach is renowned for his humor which provides some levity in a room filled with heavy weights and sweat-drenched benches. Thanks to Clement, not only has Pace athletics been elevated to the category of state championship contenders, but nicknames like Ethan “Schnitzel” Schneider and other such phenomena have originated in the weight room.

The impact of Clement is tangible on Pace athletics. If you want to see the difference, look at the Pace football team, basketball team, or any other team four years ago compared to now. Aside from the new members, the Strength and Conditioning program has created a new, strong group of athletes that the rest of the AA classification has felt. For example, Darlington head coach Tommy Atha said of Pace before the first round of the state football playoffs: “They’re very big and they’re very physical.” Pace won that game 31-0. The Knights have also reached a new level of athletic motivation this year. All athletes became more devoted to preseason workouts when the school year started.

“It’s amazing to see the progress made by an athlete from when they are freshmen to when they are seniors,” said Clement. Hailing from France, Clement has worked his way towards a strength and conditioning career from simple beginnings with a limited weight-lifting set. As he transitioned into coaching, he’s brought his unique approach to strength and conditioning to Pace, by injecting humor into such simple things like warmups. “This is the frog stretch, now I know you will all remember this,” Clement says to the soccer preseason workout group. As they all enter the awkward positioning of the stretch, excited giggling abounds from the likes of “Schnitzel,” “Big” Will Nulty and several others working to make themselves the best athletes they can be with the help of the French Phenom.