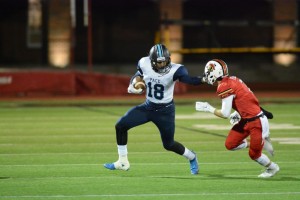 A four seed, widely written off to lose in their first-round matchup against Darlington, makes its way to the state championship game, defeating old and new opponents alike. In one of the monuments of Georgia’s capital city, this small, private school will take on the very team that knocked them out of the playoffs last year in the Elite Eight. This may sound like the build-up to a feel-good, Hollywood film, but it’s actually the story line to the Pace Academy football team.

If this Knights team (12-2) had not already legitimized themselves as title contenders going into their semifinal matchup, they certainly did afterwards. Despite being a two-touchdown underdog, the Knights dismantled the Greater Atlanta Christian School Spartans 45-20, including scoring 31 unanswered points. Although GAC may have been considered the favorites heading into the playoffs, the Knights’ work is certainly not done as they face the explosive Fitzgerald Purple Hurricane (13-1).

Fitzgerald, coming off a 40-20 victory over Jefferson County, will give the Knights their own problems with their potent offense that scores an average of 39 points per game. The Purple Hurricanes feature a mostly ground-based attack, carrying the ball 50 times for 351 yards per game. The rushing attack is led by junior JD King, who has rushed for 2377 yards and 32 touchdowns, and sophomore running back/quarterback James Graham, with 1436 rushing yards and 18 touchdowns. However, Fitzgerald is very reluctant to throw the ball (which is in no small part due to how effective their rushing attack is), as Graham averages only six attempts a game, completing only 43% of his passes for 795 yards, seven touchdowns and five interceptions.

Because of Fitzgerald’s reliance on the running game, particularly outside runs, a large responsibility falls on the linebacking core of the Knights. If they are able to force the running backs of Fitzgerald to run between the tackles, the large defensive linemen of the Knights will be able to hold the Purple Hurricane to short gains on the ground. This should put them in a lot of third and long situations and require them to rely on their inconsistent passing game.

The Knights’ secondary, who have been extremely effective in their coverage throughout the playoffs, will not have to deal with any elite threats from the Purple Hurricane wide receiver core. As long as they don’t fall for the play action fakes of Fitzgerald, the secondary should be able to disrupt the air attack of the Purple Hurricane.

On offense, the Knights just have to keep up the same level of performance they have demonstrated since the loss to GAC on Oct. 9. Since that last loss, the Knights have averaged 34 points per game, and that astounding production has been a result of the versatility of the Pace offense. With the three running back lineup of junior Deon Jackson, sophomore Realus George and freshman Keashawn Perryman, the Knights are averaging 200 rushing yards with Jackson leading the way with 73 yards per game.

Sophomore quarterback Gunnor Faulk has been leading the Knights’ offense with his remarkable efficiency this postseason (99.8 QB Rating), and his ability to extend plays with his legs, as seen in last week’s game against GAC when Faulk made a 30-yard rushing touchdown on 3rd and 23. The wide receivers of the Knights, led by senior Spencer Hemmingway and junior Trey Blount III, have shown their play-making ability throughout the playoffs. They will look to continue their effectiveness as they go against an underwhelming Fitzgerald defense that relies on turnovers to be effective. They have forced 28 turnovers this season (17 interceptions and 11 fumble recoveries).

Kickoff time for the Georgia High School Association’s (GHSA) state championship game for Class AA is 1 p.m. at the Georgia Dome. Tickets are $18 and may be purchased Saturday at the Georgia Dome, Gate E. Pace fans should enter the Dome at Gate A or Lower Gate D. GPB-TV will broadcast the game live, as will GHSA’s High School Sports Network for a $9.95 fee for a 24-hour viewing pass.