With Pace’s diverse community, students celebrate several different holidays this time of year, including Christmas, Kwanzaa and Hanukkah. Celebrations include decorating, singing, eating ginger bread, lighting a menorah, opening presents, spinning a dreidel, and, most importantly, spending time with friends and family. “My family has had the same Christmas tree for nine years now,” said sophomore Realus “Booman” George. “Even though it is plastic it still represents a ton of Christmas memories.”

Most students at The Academy celebrate Christmas over winter break. Even some students with Jewish backgrounds enjoy this festive holiday. The Leven triplets, who have both Christian and Jewish heritage, celebrate Christmas and Hanukkah. “Every winter break my parents, brothers and I head up to Michigan to visit my mom’s dad,” said sophomore Zack Leven. “My grandfather usually hangs two pickles on our Christmas tree, and they are sometimes hard to find. Whoever finds the pickles wins a prize, which is usually money.”

Although the joy of waking up early on a Christmas morning is unlike any other, the anticipation of opening up your presents drives kids insane. Unlike Christmas, which only has one morning of presents, Hanukkah brings joy to Jewish children for eight whole nights. “Every Hanukkah, my whole family gets together for one of the nights,” said freshman Nathaniel Robinson. “We eat potato latkes and Greek salad, because the Maccabees defeated the Greeks and it was a miracle. After dinner, we spin the dreidel and sing songs.”

Also celebrated this time of year, Kwanzaa is actually not a religious holiday, but rather it focuses on African American culture. Mr. Holifield and his son Caleb have celebrated Kwanzaa in the past. The Holifields spent their Christmas morning volunteering with elders in a retirement community in Westport, Connecticut. “We celebrated Kwanzaa when I was a little kid,” said Caleb, who is a sophomore. “Kwanzaa lasts four nights, and at the beginning, you make presents for people in your family and, on the last night, everybody gets their presents. It was really a fun time.” 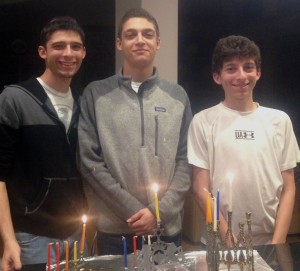 The Bernstein family poses for a quick picture after they light the menorah. Photo: Ben Bernstein