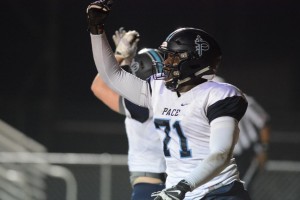 Senior Jordan Harris shocked Macon County by taking down QB K’Hari Lane for a safety and the first points on the board. Photo: Fred Assaf

The situation turned out similarly to last year: Pace Academy (11-2, 5-2 region) traveled south of Atlanta over Thanksgiving break to face a talented opponent in the Elite Eight. This time, the Knights took control of the game from the first kickoff and held off a late Macon County (10-3, 5-0 region) rally to clinch their first-ever berth in the GHSA Final Four with a 33-26 win.

Pace started the game off emphatically, as senior Jordan Harris wrestled Macon County quarterback K’Hari Lane to the ground as he threw the ball away in the end zone, resulting in a safety. On the ensuing Pace drive, sophomore Realus George scored from a yard out to give Pace an early 9-0 lead.

Macon County stayed in the game, though, as both teams traded a pair of touchdowns in the first half. The Pace touchdowns came off of passes to sophomore Tony Addison and junior Trey Blount III. Pace headed into the locker room with a 23-13 lead, but Macon County trimmed the lead to 23-20 at the end of the third quarter.

Pace looked to put the game away in the fourth quarter, as senior kicker Samuel Sloman hit a 44-yard field goal and junior running back Deon Jackson scored to put the Knights up 33-20 late in the fourth. Pace got the ball back looking to put the game away, but sophomore QB Gunnor Faulk threw his first interception of the playoffs to give the ball back to the Bulldogs. On the ensuing drive, Lane hit wide receiver Keldrick Thomas for an 80-yard touchdown pass to cut the lead to 7. But Pace proceeded to recover the onside kick and walked away with the victory.

Offensively, the rushing attack dominated for Pace again, as they passed only eight times on the night compared to 44 rushing attempts. Jackson ran for 109 yards on 13 carries and score, while George rushed for 81 on 14 carries and a touchdown. Blount caught his fourth touchdown pass of the playoffs on a 15-yard slant route from Faulk, his only catch of the night. He also contributed out of the backfield, rushing for 48 yards on four important fourth quarter carries.

On defense, Harris had a breakout game, as he forced the safety in the first quarter and contributed Pace’s only sack of the night right before halftime, along with nine total tackles. The entire defensive end core for Pace did a nice job on contain, forcing the dangerous Bulldog running back Jared Daniels to the inside more than once. Freshman Parker Spillers also forced a fumble in the fourth quarter with a massive hit on a Macon County wide receiver. Senior Jean-Luc Brown also had a fumble recovery.

Despite the game taking place over Thanksgiving break, there was a wonderful fan turnout at Macon County, even without a pep band. The fans were loud the whole night and really gave the team a boost from the stands. The Macon County support was also fantastic, as it seemed as though all of Montezuma, Georgia came out to the game. Late in the fourth quarter, after an onside kick recovery, Pace was charged with three personal foul penalties for unsportsmanlike conduct, losing a total of 45 yards.

Pace will travel a short distance to Norcross to take on Region 6AA rival Greater Atlanta Christian (12-1, 7-0 region). Pace took on GAC earlier this year (to see the recap of that game, click here: Pace vs GAC) and jumped out to a 13-12 halftime lead before ultimately falling 33-13. The Spartans are led by junior dual-threat quarterback Davis Mills, who has thrown for 2,112 yards and 19 touchdowns while rushing for 364 yards and nine touchdowns.

GAC’s three-pronged rushing attack is completed by senior running backs Alex Rowe and Marcus Young. Rowe has rushed for 786 yards and three touchdowns, while Young has rushed for 690 yards and nine touchdowns. The Spartans’ line is anchored by Vanderbilt commit Devin Cochran, who stands at 6’6″ and 305 pounds. The GAC defensive leader is senior defensive end Ford Higgins, who is committed to Navy.