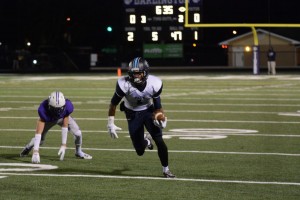 Junior wide receiver Trey Blount III takes off down the sideline on his first touchdown catch of the night. Photo: Fred Assaf

Any casual fan could see the way the game was going to go in warm-ups. Darlington, jumpy and nervous, looked like they might not be ready for the playoff stage. The visiting Knights, however, looked calm and collected, trusting their talent to take down the Tigers. As soon as the game started, Pace shot out of the gates and never looked back.

Pace Academy (9-2, 5-2 region) knocked off undefeated Darlington (10-1, 7-0 region) 31-0 this past Friday night to advance to the Round of 16 in the GHSA State Playoffs. Sophomore Gunnor Faulk was the star of the night, throwing for three touchdown passes on only four pass attempts to stoke the Knights to a big first half lead. Faulk passed for 95 yards total on the night. Meanwhile, sophomore Realus George and junior Deon Jackson dominated on the ground, rushing for 90 and 88 yards on the night respectively. Jackson capped off an excellent night for the Pace offense with a blazing 48-yard touchdown right up the middle.

The Pace defense, however, stole the show. Pace dominated from the start, getting seven tackles for losses along with three sacks from Jackson and seniors Kyle Orr and Jordan Harris. Darlington only moved into Pace territory once and they were quickly rebuffed by the solid Knight front. The key offensively for Darlington was the running game, but Pace shut it down, barely allowing anything on the ground. The poor run game led the Tigers to pass, but quarterback Hunter Manning had a hard time finding his two 6’4″ tight ends due to excellent coverage by the Pace defensive backs.

The night was the coldest one Pace has played in, as temperatures sat around 40 degrees for most of the time. After being silent the past couple of games, junior wide receiver Trey Blount III had several incredible plays on the night, including a 48-yard touchdown, a 17-yard touchdown catch off of a screen where he broke several tackles, and a 39-yard kickoff return. Darlington hung a huge banner that said “Back-to-Back Region Champs” in the east end zone and ran out of a giant inflated purple tiger to open the game. Despite the fanfare, Darlington did little to back it up.

Pace will take on the Screven County Gamecocks (10-1, 5-1 region), who destroyed a hapless Bryan County team in the first round by a score of 35-0. Screven started slow, only leading 7-0 after the first quarter, but bounded out to a huge lead in the second quarter with 28 straight points. CJ Wright, a 5’11,” 265 lb. running back, led the Gamecocks in rushing with 70 yards on 10 carries and a touchdown. Screven County only completed three passes, but wide receiver Tyquan Jackson hauled in all three for 101 yards and two touchdowns. Linebacker Jermany Hawkins is also one to look out for, as he is committed to play at Georgia Southern.

If you can’t make it out to Screven County, make sure to catch it live on KnightFlix starting at 7:30 on Friday.