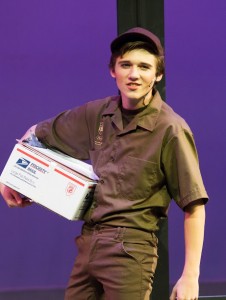 From the opening number “Omigod You Guys” to final bows, the cast of “Legally Blonde” bubbled with energy. The Delta-Nu girls (seniors Tori Dancu, Morgan Kelly, Lexi Rubin, Lindsey Sample and Emma St. Amand; juniors Ellie Duncan, Carson Myers and Libby Sams; and sophomores Jordan Shoulberg and Spencer Sinclair) opened the show with their incredible sorority house set piece. These girls kept up their sorority girl spirit throughout the whole show. Though they faced difficulty on opening night, the girls and junior Willie Lieberman (Elle Woods) were able to pull off the onstage quick-change by the second night and amaze the audience.

With a new director, people had no idea what lay in store. However, despite this being Mr. Sean Bryan’s first year working with Pace students, the characters could not have been cast more perfectly. Willie left the crowd absolutely stunned by her stellar performance as lead, Elle Woods. The two leading male actors, seniors Ryan Duvall (Emmett Richmond) and James Sadlo (Warner Huntington III), were very impressive as well. Ryan lost his voice less than a week before opening night. However, by the second night, he was able to project, resulting in beautifully harmonious duets with Willie.

“Legally Blonde” was a lot more dance-heavy than most of Pace’s previous musical productions. The choreographers should be proud of the cast for executing so many of these numbers so well throughout the show. Kudos especially to Libby (Brook Windham), who kept perfect pitch while jumping rope on stage in “Whipped into Shape.”

Impressively, the cast was able to pull off the mature humor throughout the show. Sophomore Paige Demba (Enid) was such an incredible and hilarious character. Sophomores Will Nulty (Nico) and Jeb Carter (Carlos) left the audience near tears with laughter. “Gay or European” can be a difficult number to perform well, but these boys certainly won the crowd’s applause.

Freshman Harrison Husk (Kyle) had the crowd hooting in his tight shorts while senior Payton Gannon (Paulette) swooned. Payton fully deserved her standing ovation as Paulette. Her solo “Ireland” was awe inspiring, and her character, accent and all, brought great comedy to the stage.

Though there were a few difficulties with microphones and set/outfit changes, the cast and crew of “Legally Blonde” pulled off an outstanding show. Mr. Bryan did a wonderful job with this production, and each actor deserves one final round of applause. “Snaps” for a fantastic performance.