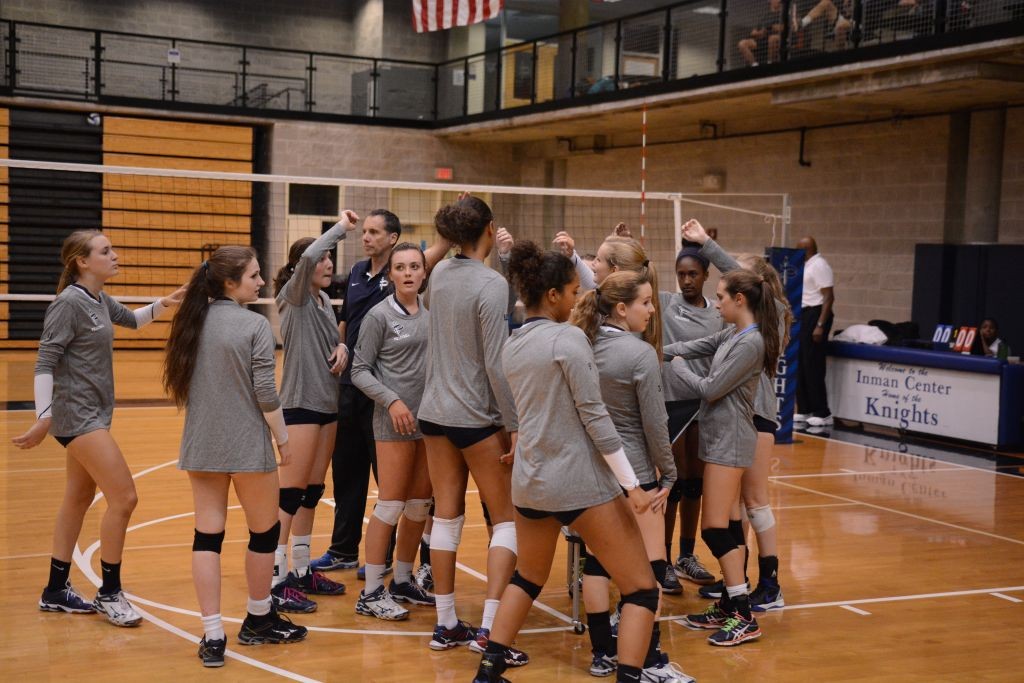 The Knights huddle up before a matchup against Hapeville Charter.
Photo: Fred Assaf

After a successful regular season in which the Knights went 21-13, the Pace varsity volleyball squad advanced all the way to the Elite Eight of the GHSA playoffs. The Knights, seeded fifth, traveled to Savannah to play in front of a packed gym at St. Vincent’s Academy. They battled all the way until the end of the fifth game, eventually falling to the Saints 3-2 in an ultimate nail-biter.

To get there, the Knights pummeled Rabun County in the Inman Center on Oct. 20 in their first round matchup. They swept all three games of the best of five match, dominating the Wildcats to advance to the Elite Eight.

The Knights had one of their most successful seasons in recent history, building off of an equally impressive season last year. Last year, the team posted a 19-14 record and had strong support from its five seniors. After losing those seniors and other players like junior Kaki Cox, the Knights had many spots to fill. Many players stepped up to the challenge to provide consistent play, including seniors Frances Crisler and Lauren Archer.

The team has also seen high-level play from their five juniors: Summer Brown, Megan Botsch, Kate Bethel, Kendall Kirkman and McKenzie Baker. “Summer is a leader on the court and puts the team on our back, while Megan is a constant threat,” said Frances. “Kate and Baker also hold down the middle and do a great job on our offense.”

With valuable contributions from their leaders and consistent play from the entire team, the Knights were able to seize their first area championship in school history. That victory gave the team momentum heading into the playoffs that propelled them to their first round win.

In addition to the area and state championships, two victories over the neighboring Lovett Lions were highlights of the season. While they will lose Lauren and Frances, the Knights are returning most of their team and look poised to make yet another run next season.