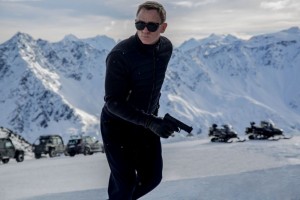 The spy, the martini, the car and the girl. Unlike ‘Skyfall’ (2012), the last installment in Ian Fleming’s James Bond series that went far outside the mold of a traditional Bond movie, the Sam Mendes-directed ‘Spectre’ followed all of the familiar twists and turns that Bond fans know and love. The movie opens with the skeletal faces of the Day of the Dead parade in Mexico City in a running shot of a masked Bond (Daniel Craig) tracking down his target.

He follows the trail to a secret organization, “S.P.E.C.T.R.E.,” run by the dastardly Blofeld (Cristoph Waltz) and the hulking Mr. Hinx (Dave Bautista). To take down S.P.E.C.T.R.E., Bond travels to the snowy mountains of Austria to find the beautiful psychiatrist Madeleine Swann (Léa Seydoux) with whom he plays a game of cat and mouse across the globe from Austria to the desert of Morocco and eventually to the city streets of London.

As an action flick, the car chases and fight scenes will leave any fan satisfied, although it lacks the impossible stunts of the “Mission: Impossible” franchise. As a movie, though, the plot seemed cliché and a bit melodramatic. Bond has an air of invincibility around him, and it was hard to take Waltz’s villainous character seriously due to his diminutive stature. Craig, in his fourth installment as Bond and possibly his last, played Bond as well as ever despite his typical lack of emotion. Supporting characters such as Waltz, Seydoux and Ralph Fiennes as “M” all impressed, even though Bautista almost seemed a little too amiable for his role as the Big Bad.

My final verdict on “Spectre” is, if you want the martinis, Aston Martins, gorgeous female leads, a fast-paced action plot and a few well-timed product placements, this Bond movie is for you. If you want more of a complicated plot structure, though, a movie like “Bridge of Spies” or “The Martian” might be a better choice.