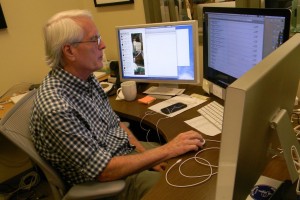 The multi-talented technology, science and tennis extraordinaire, Mr. Neil DeRosa, is a hidden gem who works on the first floor of the Arthur M. Blank Family Upper School building. “Neil DeRosa is a legend of legends,” said junior Prashanth Kumar. Mr. DeRosa joined the Pace faculty in 1973 on the request that he coach the varsity boys tennis team, having previously given tennis lessons to the headmaster’s wife. Upon coming to Pace, Mr. DeRosa has taught multiple science classes and coached the varsity boys tennis team, earning seven state championships. He currently serves on the Administrative Team and is the Technology Coordinator.

With a major in biology and minor in chemistry at Georgia Tech, he joined the classroom to teach middle school and upper school science classes including biology, physics, microbiology, geology, astronomy and chemistry. Of his first years, Mr. DeRosa said, “I basically lived at Pace.” He said that he would teach all day, coach tennis after school, and was hired to do maintenance work around the campus, especially in the summer. One of his more memorable moments was when he had to sand the Boyd Gym basketball court to prep it for shellacking while Mr. Charlie Owens, current math chair and longest working faculty member, was painting the outside of the gym.

Mr. DeRosa grew up in New Orleans and moved to Atlanta in 1959. He attended E. Rivers Elementary School and North Fulton High School. After attending Georgia Tech, he earned his Master’s degree in biology at Georgia Southern University. Mr. DeRosa had originally planned to master in chemistry, but found that he enjoyed learning biology. The irony lies in what happened after he started teaching at Pace. “I found that I enjoyed teaching chemistry more than biology,” he said. “It is more conceptual and includes more math than biology, which requires more memorization.”

When asked how he adapted to the changing technology throughout the years, Mr. DeRosa explained what the computer science classes were like before and after instituting computers at Pace in 1992. His first computer classes were an ordeal to teach. “We had to dial into a machine like a ticker-tape and issue orders,” he said. “From there, we could send programs into the machine with a modem that connected to the Atlanta Public School system and the machine would then compile and send results back.”

With the addition of desktop computers, which were installed by Georgia Tech graduate Jim Diez, the computer department advanced by improving learning and communication in the classroom. Mr. Diez recognized his talent and asked Mr. DeRosa to work in the IT department, which he has been doing ever since.

Mr. DeRosa has numerous favorite moments at Pace. “One of the most exciting moments was when one of our boys [on the varsity boys tennis team] served for the state championship point and the ball hit the frame of the racket,” he said. “There was so much backspin that it ended up actually bouncing into the opposing team’s service box and coming back over the net for our doubles team to win the match.”

Another favorite moment was when Fred Assaf became headmaster ten years ago. “Mr. Assaf has been a remarkable asset to Pace and has made some incredible changes since he has been here,” said Mr. DeRosa. “He has done more in these past ten years compared to the first thirty years that I have worked here.”

Mr. DeRosa is very fond of the new additions to Pace, especially the Isdell Center for Global Leadership. “One of the best things that has ever happened at Pace is the ICGL program,” he said. “I think it is just phenomenal.” Mr. DeRosa loves the integration of global research and experiences for students to learn and grow from, especially since he enjoys many outdoor activities such as hiking, fishing, and of course his favorite, tennis.