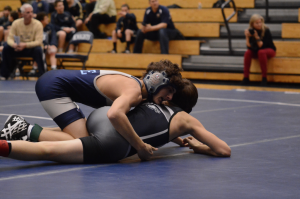 As the season quickly shifts from fall to winter, so comes the annual arrival of wrestling season. The Pace Academy wrestling team is coming off a stellar performance just a year ago, as two wrestlers (senior captain Jack Walsh and sophomore Frank Houser) competed in last year’s GHSA state tournament. Frank finished fifth and Jack finished third in their respective weight classes, and this year they and the rest of the team expect to reach new heights.

During the season, anyone who visits the Inman Center after school hours will see the team completing their everyday conditioning on the track while being ushered by Head Coach Mark Sommerville. “[We combine] stretching, running, climbing the rope, drilling, wrestling, conditioning and fun,” said Coach Sommerville. He said that this season could bring many achievements for Pace wrestling, including the first wrestler (Jack) to compete in the state tournament all four years since Tom Macklin ’94. “I’m also very excited to see the competition between [sophomore] Jamaree Salyer and [senior] Timothy Coleman for the lone Heavyweight spot,” said Coach Sommerville.

The members of the team are complimentary of each other’s skills and potential. Frank was quick to say that he thought both Jack and freshman Charlie Warren should be “fye” this year. “Charlie has a lot of potential,” said Frank, “and Jack has proven himself as one of the best in the state.” Jack responded by saying, “I think we will be solid all around this season, but look for Frank Houser to have another great year.” As for the team’s goals, Captain Walsh added, “Anything less than a state championship for me will be a letdown, and for the team, I feel that we are going to have the best year in a long time. This is definitely the best team I will be a part of at Pace.”