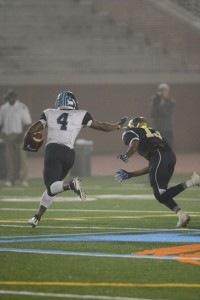 Junior running back Deon Jackson stiff-arms a B.E.S.T. defender on a run to the outside. Jackson finished with 174 rushing yards on the night. Photo: Fred Assaf

Despite playing on a Thursday night in a massive, almost empty behemoth of a stadium against a team that almost knocked them out of a playoff spot last year, Pace varsity football (8-2, 5-2 region) took down the B.E.S.T. Academy Eagles (2-8, 1-6 region) last Thursday night in their last regular season game before the state playoffs. Pace dominated on the ground throughout the night, rushing for an astounding 384 total yards including a 96-yard touchdown run by junior Deon Jackson.

Deon tracked down B.E.S.T. running back Deshaunt Hester on the Pace 10-yard line after a gain of 80 yards, which ultimately led to the Eagles turning the ball over on downs. A few plays later, Deon took off up the middle to put Pace ahead for good, gaining 96 of his 174 rushing yards on one play. Freshman Keashawn Perryman and sophomore Realus George also had fantastic rushing games, running for 116 and 84 yards respectively.

The Pace defense allowed 331 total yards of offense, but stood out in their ability to hold B.E.S.T. in the red zone and force the Eagles to turn the ball over on downs several times. Pace also limited the passing game, putting pressure on the quarterback up the middle, and forced two turnovers on the night.

Junior Mark Sommerville made an incredible catch in the second quarter when he jumped up for a ball in the end zone, tipped the ball up in there, and caught the ball as he lay on his back on the ground. Unfortunately, he was deemed out of bounds when he caught the ball, negating the catch. For the second straight game, the backups got a good bit of playing time in the second half, which also allowed the starters to rest for the upcoming playoffs. Lakewood Stadium was by far the biggest stadium Pace has played in, but turnout was low for both teams due to the game taking place on a Thursday and the foggy, cold weather.

After capping off a fantastic eight-win regular season, Pace turns their attention to the playoffs. After “losing” the coin flip last Saturday, Pace is seeded 4th in Region-6AA and will face the undefeated Darlington Tigers out of region-7AA. Darlington features a power running game similar to that of Landmark Christian. Although the Tigers are undefeated, they are ranked 9th in the state while Pace is ranked 7th, according to MaxPreps.com. Also, the best team Darlington played this season is 13th-ranked Model County, while Pace has played three of the top 12 teams. Regardless, the contest should be tightly contested. Make sure to catch it this Friday, November 13 only on KnightFlix.