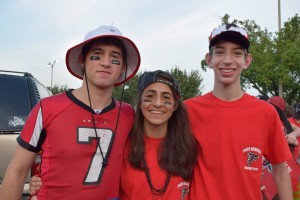 Two years ago, Pace faculty member Tommy Hattori began a new yearly innovation contest called the Social Entrepreneurship Challenge. In its inaugural year, the contest’s theme was the issue of traffic in Atlanta, and from the challenge arose Scootle. Developed by then-juniors Matt Tannenblatt, Larine Hamied and Tanner Lewis, the app won the $10,000 top prize to put towards launching the app to the public. After about a year and a half of testing and improvements, the app was released this September on the iTunes App Store and is available to download now.

When faced with the topic of the challenge, traffic, the Scootle team took an innovative approach. Instead of synchronizing lights or building public transit, Scootle aims to get people out of their cars during rush hour so they can be productive. That means eating, shopping and volunteering, which Scootle gives users easy access to. “We had the idea to make a navigation app like Google Maps that combined all forms of transportation and ranked them by which was environmentally friendly,” said Larine. “We realized, though, that it wasn’t enough to give app users the knowledge to make the right choice – we would have to incentivize them.”

The app offers discounts at local businesses and volunteer opportunities at local organizations so that while many are stuck in traffic, users can skip the stress and be active. It allows people to get away from the stressful workday in ways that are fun, relaxing or beneficial for the community.

So far in its initial pilot launch, the app has approximately six restaurants in the Buckhead area that range from pizza joints to sushi. In addition, the app features four local businesses as well as two local nonprofits, Park Pride and Junior Achievement of Georgia. In the near future, more options will join those already featured. “While we are running this pilot until the start of the new year, we are also signing on new businesses and partnering with more volunteer organizations so that the users have more choices to engage with,” said Matt, now a freshman at Dartmouth College.

In addition to adding new businesses, Scootle will be undergoing some improvements to make it more connected. These improvements include Facebook integration so that users can share the places they visited as well as an RSVP feature to let friends attend an event with each other. With the improvements and new opportunities, Scootle will look to expand their user base to help pull people out of traffic.