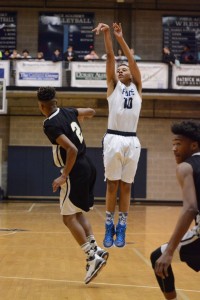 As the volleyball nets go down and the basketball hoops return, a feeling of excitement grows among Pace community. Last year, the mens varsity basketball team captured the admiration of the school community after the squad combined 27 wins with humbleness. Unfortunately, the post-season ended early for the Knights, down south in the rowdy gym of the Vidalia Indians. Now, after losing four key seniors, the Knights are faced with the challenge of reasserting themselves among the other Class 2A schools.

Losing Class of 2015’s Elijah Holifield, Kevin Johnson, Elijah Sheft and Waide Swain will challenge the basketball team, but the tremendous work put in during the summer and fall seasons will help pave the way for a successful season. “I think the skill work I got at Pace during the offseason was a good stepping stone for me,” said St. John’s freshman shooting guard, Elijah Holifield. “I know I’ll never have a group of guys and a fan base behind me like I had at Pace.”

The Knights’ basketball team will be a young squad who will look to seniors including Mick Assaf and Zack Kaminsky for leadership. “I’ve already learned a lot from Zack in the preseason, and I’m excited to continue working with him,” said sophomore guard Harrison Lewis.

The future looks bright for the team, as the majority of the squad includes juniors and sophomores. The Knights will welcome two new sophomores, Harrison, a 6’1″ combo guard and Isaiah Kelly, a 6’6″ small forward; and one new freshman, Miles Todd, a 6′ 1″ guard. They will look to bring quickness at the guard and forward positions.

Harrison honed his skills on the JV Pace basketball team last year, where he was the only freshman to make the team. Isaiah played varsity basketball at Greater Augusta Christian School, and is seen as one of Georgia’s most exciting basketball talents. Since the team has over 20 combined college offers, the Knight’s squad will be full of talent.

“We have been working hard this offseason, so hopefully it will pay off for our talented team,” said Harrison. With junior Wendell Carter Jr. and Isaiah getting early national and college recognition, the Knights will be attending many out-of-state tournaments, including the Chick-fil-A Classic in Columbus, South Carolina; the State Farm Classic in Spartanburg, South Carolina and the Music City Classic in Nashville, Tennessee.

“After a disappointing end of last year, I’m excited to start working with the guys again this year,” said Head Coach Demetrius Smith. Be on the lookout as the promising team starts their season with the HoopsGiving Showcase at Holy Innocents’ on Nov. 28. The Knights play Westlake at 8 p.m.