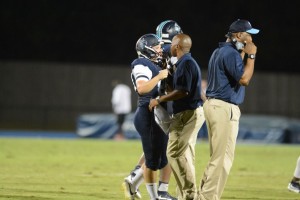 Samuel Sloman celebrates on his way to the sidelines after hitting a game-winning field goal against White County. Photo: Fred Assaf

With eight seconds on the clock and the Knights down by one, Pace senior kicker Samuel Sloman lines up for a 48-yard field goal with a chance to win the game. With the entire crowd on the edge of their seats, Samuel sends the football sailing through the uprights in dramatic fashion as the Knights defeat White County 16-14.

A large chunk of the win is owed to Samuel, considering he had already successfully made two field goals of 26 and 53 yards prior to his game-winner. For his efforts, he was honored with the Kohl’s Kicking National Player of the Week, collecting over 13 thousand votes. Internally, Samuel was not only named special teams MVP of the game by Pace Head Coach Chris Slade, but also named offensive MVP by accounting for 10 of the Knights’ 16 points.

After the White County game, Samuel attracted attention from many different media outlets. In addition to Kohl’s Kicking, some University of Georgia news sites, including FanBuzz and Rivals.com, picked up his story. Both sites, which cover UGA’s football program and their recruits, targeted Samuel for a piece regarding the Bulldogs, which the standout kicker listed as a “dream school.”

Samuel has had a gigantic impact on the football program since he started playing his junior year.  He started off successfully in his first season as the Knights’ placekicker. In the regular season this year, he made 29 out of 29 PAT attempts and has hit 15 of his 17 field goal attempts, his longest being the 53-yarder against White County.

“[Samuel] has made tremendous strides since last season,” said the Coach Slade. “He came out last season just expecting to try something new, but now he has a chance to kick at the next level.” In addition to his incredible field goal percentage, of his 50 kickoffs this year, 45 have gone for touchbacks. His ability to send the ball into the endzone for a touchback has been a big help to the Knights’ special teams unit, which struggled last year on punt and kickoff coverage.

Although it was not necessarily his breakout game, Samuel’s work against White County solidified his status as an elite kicker. He helped carry the team, and as Coach Slade put it, his performance was “one for the ages.”