Joel Salatin: The Most Interesting Man in the World

Isdell Center for Global Leadership Scholar Joel Salatin is the full-time, innovative farmer of Polyface Farm in Virginia. Mr. Salatin visited Pace in October to provide his expertise and raise awareness of issues surrounding the ICGL theme for the 2015-2016 school year: food.

Mr. Salatin is continuing the legacy of his three-generation family business, maintaining the traditional, holistic values of his predecessors. Polyface supplies 5,000 families, 50 locally based restaurants, and 10 retail outlets nationwide. His alternative agriculture methods have been praised by National Geographic, Smithsonian Magazine and ABC World News. Also a highly acclaimed author, Salatin has published nine thought-provoking novels, and is in the process of publishing his 10th in May 2016.

While Mr. Salatin was at Pace the week of Oct. 5, he visited with Knightly News staffers for a discussion and interview.

Knightly News: What do you have to say about the objections to your free range farming system? Some say there is not enough land to properly accommodate this system.

Salatin: There are numerous objections. If the objection is about the animals coexisting with wildlife and therefore garnering diseases, I would say that is coming from a paradigm that nature is fundamentally sick. We believe that nature is fundamentally well, and if it is sick, we probably broke it. [At our farm] we see that an ecologically proper farm is one that stimulates and integrates wildlife, and has a symbiotic relationship with wildlife. The other angle is that it ‘can’t feed the world’ or it is very unproductive. You have to realize that 500 years ago there was much more food produced than there is today, and so natural systems are much more productive. As humans, it’s our responsibility to bring our technology tempered with humility to nature’s patterns and massage them, not adulterate them, but to run alongside as a team member. It doesn’t take any more land to do this than it does in a confinement house.

Knighly News: Do you have a favorite among your books, or a concept that one focuses on that you feel particularly passionate about?

Salatin: It would be “The Sheer Ecstasy of Being a Lunatic Farmer.” I call that my “soul book.” That’s the one that a lot of people are upset with me about because I seem to put one farmer against another. They say we are all farmers, and we are all in this together, but I don’t see the farmer that’s destroying the ecology as being on my team. I don’t want him on my team. In fact, I want to do all I can to help people understand that we are not on the same team. So, I make no apologies for saying there are good farmers and bad farmers, just like there is good food and bad food. I think the more we try to shove the differences under the table, the less helpful we are going to be to make the changes needed to make our ecology better.

Knightly News: What inspired you to write your new novel due out May 2016?

Salatin: It is interesting. I call this my coming-out book. The title is “Pigness of Pigs, Does God Care?” If you do not know my self-made motto, it’s, “I’m a Christian libertarian environmentalist capitalist lunatic farmer.” And all of those things mean something. The reason I started using this is because I became tired of being pigeonholed. “Oh, he’s an organic farmer,” “Well, he must be a liberal Democrat because he’s an environmentalist.” Eventually you get to all of these stereotypes, so I developed my own which sounds impossible. It’s fun making everyone step back and question themselves and their labels.

Being Christian is extremely important to me. I am a Christian, but many times I’m embarrassed about how the faith community views their responsibility in creation stewardship and makes fun of the “wacko environmentalist.” This [book] is essentially a wake up call to the religious community to step up to the plate. We say God owns it all. Well, if he does, what’s his return on investment?

Knightly News: So do you think that farmers that are devout Christians have an obligation to farm in a specific way?

Salatin: Absolutely! For example, farming in a way that erodes the soil is essentially equivalent to rape. That’s a strong word, but look, you didn’t put that soil there and that soil took a long time to get there. For you to just take that equity that you did not create and turn it into cash is simply pillaging. It is desecrating God’s creation.

Knightly News: Would you like to see the American food system going back to smaller scale, more natural farming?

Salatin: Yes, this is not about big or small. It’s about protocol modeling. I am a big candidate for farming. We can and we should do this. We know how to farm more productively without using harmful chemicals and grow soil. You don’t have to give up the economy or the ecology; they are not at cross purposes, they are logistic. The only reason we think they are at cross purposes is because we have constipation of imagination. We aren’t brave enough to imagine how that can work, but the truth is that it can. And there’s no reason why the entire food system cannot be an ecologically enhancing blessing on the landscape. 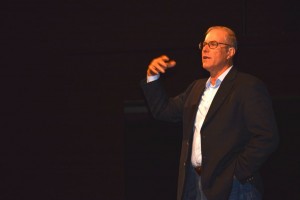 Mr. Salatin visited Pace in early October to discuss Polyface and environmentally safe farming systems. He will work closely with the school in advancing the ICGL theme of food throughout the school year. Photo: Pace Communications Office