Gun Control Is Not the Answer 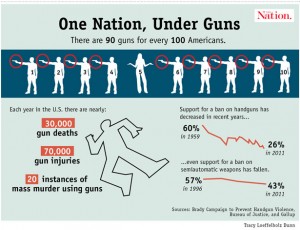 Unfortunately, we have once again been faced with a tragic shooting, this time at Umpqua Community College in Roseburg, Oregon. We as a nation mourn the loss of lives, but the way to stop mass shootings cannot be determined by an emotional response.

Gun control is not the answer. The unfortunate reality is that any measures that are enforced with the intent of restricting access and the ability to carry guns will not stop the acts of mass violence. The addition of new gun laws will simply make it harder for law-abiding citizens to obtain guns. The definition of a criminal is a person who has broken the law, and to assume criminals will suddenly abide by new laws that restrict access to buy guns is simply naïve and idealistic.

The idea of banning military grade assault weapons is an attempt to blame the instrument of murder rather than the murderer themselves. To assume that a person will be unable to obtain a type of gun because it is illegal is the same as assuming a person will not be able to acquire cocaine because it is illegal. That is simply not the case. Other proposed solutions such as limiting the size of magazines are merely ineffective pieces of legislation that will allow supporting members of Congress and the Senate to claim that they invoked change while running for their next campaign.

There are better methods to stop these mass shootings than creating misguided legislation. First, education is the most important asset in combating mass violence. By educating the masses on firearm maintenance and safety, accidental shootings would decline, and it would also remove the perception among many of today’s youth that guns are toys.

Guns also have not contributed to an increase of crime in the United States. Violent crime has been in steady decline in the U.S. since 1999, as shown in the uniform crime reports published by the FBI, from 1.426 million violent crimes in 1999 to 1.163 million in 2014. These violent crime figures in combination with the rising number of guns in the U.S., from 261 million guns in 1999 to 347 million in 2012 as estimated by Gary Kleck in his book “Point Blank: Guns and Violence in America,” show that more guns have not led to an increase in violent crimes.

A Gallup poll that included 1,017 randomly selected people in the U.S. that was conducted in October 2014 showed that 63% of Americans believe that having a gun in their house makes them safer compared to 30% who believe guns make their lives more dangerous and 6% who claim that it depends on the circumstances. These findings show an enormous increase in pro-gun sentiment from 2000 when another Gallup poll found that only 35% of Americans believed that owning a gun made them safer. So the majority of Americans believe that guns make them safer and statistics show that the increased number of guns in the U.S. has not led to a greater number of violent crimes, so why is there even a discussion about gun control?

In simple terms, because the murderers (some of whom could easily qualify as terrorists) and the criminal acts they have committed have become so much more terrifying. Mass shootings like the ones that occurred at Sandy Hook Elementary School in Newtown, Connecticut and Umpqua Community College strike fear into everyone because they occurred at schools, a place where parents and students alike believe that children are safe.

We have seen the impact of this fear around us at Pace. After the Newtown shooting, Pace Academy has had a police officer on campus in case of such an attack. Although you may disagree with how to address gun control, the fact remains that guns are around us and I would prefer to have the opportunity to protect myself rather than depend on a criminal abiding by the laws.