Droppin’ Rhymes in the FAC 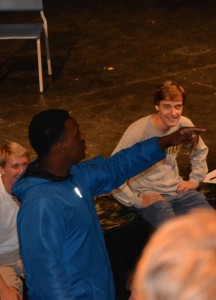 Big Tim is cruising down the street in his ’64. On Friday mornings, the free style superstar separates himself from his peers and focuses on his super hot beats. As the clock strikes 7:55 a.m., senior Timothy Coleman makes his way to the Fine Arts Center to prepare to drop his dirty rhymes all over the upper school students. Silence and suspense are palpable as Tim’s hand rises over the heads of the senior class.

Three years ago, this student-favorite event was started by Los Angeles Dodgers’ Minor League pitcher Kameron Uter. “I started freestyle Friday as a junior,” said Kameron. “We were in our homeroom and everybody was sitting quietly, so I stood up and said something random. People seemed to think that it was funny and told me I should make it a weekly occurrence in the Fine Arts Center. So it just kind of happened.” Kameron quickly realized that he needed another rapper to battle against him in the mornings. Fellow junior Osei Avril accepted the challenge and became Kameron’s rap battle opponent. This duo thus brought the weekly tradition of freestyle Friday to Pace Academy.

This year, Tim has taken over as lead rapper on Friday mornings. Consistently joining Tim as a member of the 2015 rap squad, sophomore Caleb Holifield has stepped up his game in an effort to fill the shoes of graduated brother and glorified rapper, Elijah Holifield ’15. “Inspiration came from seeing how much fun my friends and brother had last year rapping,” said Caleb. “Also, seeing “8 Mile” about 100 times this summer made me want to be like B-Rabbit.”

With so many Fridays during the year, the question arises as to how these rappers come up with stuff to rap about week after week. “Listening to music in the morning and thinking about stuff that makes me laugh is usually what I try to rap about,” said Caleb. “Then, after that, all I have to do is make sure it rhymes and I am good to go.”

The rappers have been given restrictions on what can be said during these raps, due to last year’s roast of Braylin Robinson ’15 by Tim. “I am aware that there have been limits set as to what I can rap about,” said Tim. “But don’t worry, I will continue giving the people what they ask for: my dirty rhymes.”