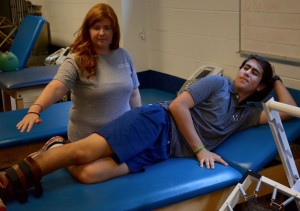 Tucked away inside the musty weight room, under the thundering floor of the Boyd Gym hides the key to a successful sports team: the athletic training room. An injury dejects all athletes, but Pace has assembled a force of trainers who will brighten the athlete’s day and return them to competition as soon as possible. As the saying goes, “All world class athletes deserve world class facilities,” and Pace Academy rewards their athletes with upscale facilities and unbeatable trainers.

Losing trainer Chris Orts-Marshall was tough for athletes at the Academy, but the hire of Marie Lackman has filled the void that was left behind. Jaime Fulcher, Ashley Roberts and Marie,  otherwise known as “The Triple Threat,” are the real MVP’s of the Pace Academy athletic teams.

Jaime studied at Agnes Scott College and University of Tennessee at Chattanooga, and has brought her wisdom to the training room. Besides helping Pace athletes heal, Jaime enjoys volunteering with young kids at her local church or spending time at home playing with her cat. After graduating from Agnes Scott with a varsity letter in softball, Jaime went on to work for Pace.

Jaime’s lively personality combined with her laughter and sense of humor brightens the day of any injured and gloomy athlete. “I wanted to become an athletic trainer because I want to help athletes compete to their highest potential,” said Jaime. “I take pride in seeing one of my athletes returning to the sport they love.”

Ashley, otherwise known as “Shley” in the athletic training room, comes from Anderson, South Carolina and arrived at Pace after studying at Erskine College and Georgia State University. For the last 11 years, Ashley has brought her expertise and sassy banter to the Academy to work with wounded athletes. After 3 p.m., Ashley struts into the training room and greets athletes of all sports, who drown her in questions about their ankles, wrists, shoulders, etc.

“After I work hard in the athletic training room and at Children’s Healthcare of Atlanta, I look forward to returning to my house on the ‘Hooch’ and playing with my dogs, Bowman and Maddie,” said Ashley. “Even though certain athletes are too lazy to rehab with us every day, I feel pride when I see the Pace Academy Knights cop a W.”

Marie’s first several weeks at the Academy have been flawless. Expected by most to slowly get involved with the athletes, Marie has already contributed expert advice and amusing ribbing. Like Ashley, Marie works at Children’s Healthcare of Atlanta, where she cares for all types of patients.

Born in Boise, Idaho, Marie has made the long journey to the South, where she fits in perfectly with the other two athletic trainers. “After work I enjoy camping, watching college sports, scrapbooking and playing with my daughter,” said Marie. Marie has enjoyed her first few months as athletic trainer and looks forward to the work ahead.