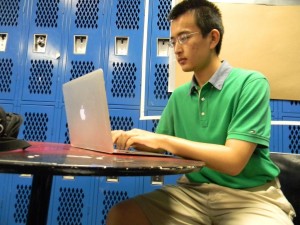 Senior Andrew Wu is renowned for his academic scholarship, his leadership in the Junior Classical League and his immaculate “Guitar Hero” skills. But a facet of his amazing profile that few people know about is his work in progress, the book “Space, Time and the Universe: A Comprehensive Guide to the Finer Points of Astronomy and Astrophysics.”

Andrew already had an interest in astrophysics and space in general since elementary school. However, he was first inspired to write the book back in middle school. “The idea for the book originated for me in seventh grade, when I joined a teacher-led group, which included then-English teacher Mrs. Quintrell, reading “A Wrinkle In Time” by Madeleine L’Engle,” said Andrew. “The book sparked the first of my deep considerations of physical realities and possibilities by stretching my horizons and compelling me to look into dimensional theories.”

He began working on the book shortly after the end of seventh grade and has continued to work on the book each summer since. “I originally intended it to be a work for personal interest alone, but after putting a significant amount of work and time into it, I decided it had the potential to be published with the goal of demonstrating the importance of astronomy and astrophysics in the current world society,” said Andrew. “I plan to continue this work after I graduate from high school, and even college, if required, since this is my most significant form of individual expression and a practical application of my interest in theoretical or mysteriously grand realms.”

Andrew, aside from receiving feedback from former Pace teachers Dr. Link and Dr. Kasilus and current Pace teacher Mrs. Hall, has worked independently of Pace faculty on his book. There have been plenty of challenges for him during his “magnum opus-in-progress” [great work in progress], as he calls it. One such challenge has been “organizing the topic to fit in the context of the book,” said Andrew, “which often involves struggling with formatting and design as well as refining the table of contents.”

Of course, the most challenging aspect of creating this book has been learning all of the elements that are included in such an enormous topic, as he also has an extensive list of terms that he must update when he comes across an unfamiliar word. Along with the extensive academic paper, Andrew also has a bibliography where he cites reputable sources that are used for both research and graphic supplements. Although it might be a while before the book is making headlines, Andrew will have completed an impressive piece of research that will amaze even the most intellectual minds.