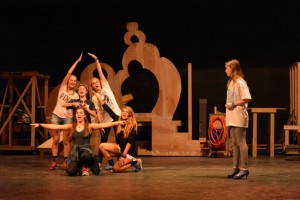 With a new head to the well-known Pace drama program, many are anxious to see this year’s fall musical, “Legally Blonde,” which opens Thursday in the FAC. Mr. Sean Bryan jumped right into a challenging but exciting position as theatre director from his previous position as performing arts department chair and drama teacher at Ransom Everglades School in Miami. Before opening night, there was already plenty of talk about the upcoming production.

“Legally Blonde” is very different from past musicals chosen by former theatre director Mr. George Mengert. “I love what it has to say,” said Mr. Bryan. “It tells the community to trust in what makes each of us unique.”

“It’s interesting working under a new director,” said senior James Sadlo who plays Warner Huntington III. With a new director comes new surprises. Casting juniors as leads definitely came as a surprise at first to most of the seniors, although it has been done before. Junior Willie Lieberman plays the lead role of Elle Woods and junior Libby Sams has the large supporting role of Brooke Wyndham in Act Two.

“’Legally Blonde’ tackles serious issues through a light, energized lens,” said Mr. Bryan. It tackles many global issues including female struggle in a male dominated field, being true to yourself rather than changing to “fit in,” and maintaining a strong moral compass against great pressure, according to Mr. Bryan. “While this show does address serious themes, it does so in a wonderfully fun and funny way,” he said. “‘Legally Blonde’ is filled with great music characters, dancing and canines.”

Mr. Bryan brought in two outside choreographers, Angela and Zach, to teach the students elaborate dances. “Legally Blonde” is a dance-heavy musical with many choreo-filled interludes.

At the production’s first run-through of Act One, it was clear that the show will be a success. Each individual seems to fit their role well, and the overall group definitely makes for a talented cast. Willie is a fantastically bubbly Elle, and junior Mitchell Zwecker surely fits the shark-stereotype lawyer role. “Mr. Bryan brings such a joyful and productive feeling to rehearsal,” said sophomore Jeb Carter. “He makes doing the show so much better.”