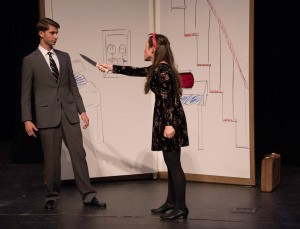 Senior Jared Goldman and junior Emma Downey captured in action during Friday’s performance of ‘The Book of Everything.’ Photo: Laura Inman

Through the eyes of a nine-year-old named Thomas, played by freshman Harrison Husk, the one act play “The Book of Everything” tackled the important topics of racism, sexism, domestic violence and religion in the 1950s South. With performances in the FAC on Oct. 22 and 23, this 10-person cast deserves a round of applause. Although the themes were sobering, they were able to capture the audience’s attention throughout, injecting humor to provide some relief from the dramatic tension.

The play was only 45 minutes, and set changes were creatively accomplished by cast members turning the pages of a giant book, a set piece in itself. This book had different rooms and settings illustrated on each page. Characters would flip the pages throughout the play when the setting changed.

Sound effects for hail, slapping and wooden spoon spanking were performed by the whole cast. Hand clapping was an important part of the play which also occurred during every blackout and scene change. According to Mr. Scott Sargent, director of the play, the cast added in the clapping between scenes for their second performance to fill the void of the blackouts. This represented the hailstorm as well as the beatings, metaphorically.

While there were some uncomfortable scenes given the emotionally charged subject matter, the actors certainly managed to make it the best it could be. Senior Jared Goldman held his terrifyingly violent character of the racist, sexist, pious 1950s father throughout the whole play. Some audience members even squirmed in their seats in fear of him raising his voice at the wife, played by freshman Allison Reish.

Junior Emma Downey did a wonderful job as the 16-year-old sister, Margot, who turns into the strong, brave feminist heroine of the family. As alumna Rebecca Husk’s younger brother, the bar was set high for Harrison as the lead of the play, and he certainly met expectations. Rounding out the talented cast were freshmen Ania Briscoe as Mrs. Alexander, and Grace Pottorff and Margaret Bethel as children; sophomores Reilly Murtaugh as Eliza and Will Nulty as the Bumbiter; and senior Lexi Rubin as Aunt Bea.

By the end of the 45 minutes, “The Book of Everything” certainly came together and left the Fine Arts Center echoing with applause. The cast and crew are taking the production to the GHSA One Act Play regional competition at Wesleyan this Saturday, and they say some things may be tweaked between now and then. The GHSA state championship competition for Class AA will be held Nov. 7 at Baldwin High School in Milledgeville. Best of luck to the cast and crew of “The Book of Everything” as they compete next against GAC, Stilwell School of the Arts and Wesleyan at Wesleyan.