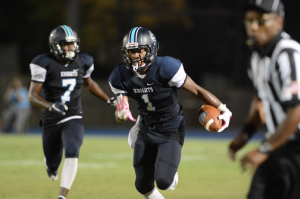 At the end of last high school football season, Trey Blount finished his sophomore year at Hillgrove High School as a talented receiver in an offense that had little passing in its scheme. With only 11 catches on the year for a total of 109 yards and one touchdown, Trey was seeking a change.

Less than a year later, Trey Blount has become a star on the Pace football squad and received national attention from colleges due to his football ability and overall athleticism. Trey entered the scene almost immediately when he scored the first Pace touchdown of the season on a 52-yard punt return during the 24-0 victory against Lovett on Aug. 21.

Since then, Trey has posted stellar numbers through the first six games, including 13 catches for 282 yards and two touchdowns. He has quickly become loved around school and on the field by fans and teammates alike. “Trey is #1 on the field and #1 in my heart,” said starting sophomore quarterback Gunnor Faulk.

Seven years ago, if someone had told Trey Blount that he would be a 4-star nationally ranked football player as a junior in high school, he would not have believed you. “I had no intentions of playing football when I was eight years old,” said Trey. Trey has already received offers to play at the Universities of Alabama, South Carolina, Miami and Georgia.

Even though football has now become one of the biggest parts of his life, Trey is also interested in several other possible extracurriculars this year at Pace. “I’ve thought about taking part in acting this year,” he said, “and I’ll also run track this upcoming spring.”

With three regular season games to go, Trey hopes to reach his goals for the season both as an individual and with the team. “I set goals for myself to have at least 50 catches, 1300 yards, and 15 touchdowns this year,” said Trey, “but the most important thing to me is to make a legitimate run at a state championship this year.”